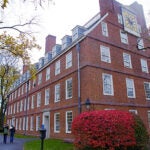 Harvard University Provost Alan Garber today announced the appointment of George Andreou as director of the Harvard University Press, beginning in September. Andreou, currently vice president and senior editor at Alfred A. Knopf, succeeds William P. Sisler, who served at the helm of the press from 1990 until his recent retirement.

“We are delighted that George Andreou will direct the Harvard University Press,” said Garber. “The press is a leader in the world of academic publishing, and Andreou’s outstanding record in trade publishing, broad understanding of the industry, and previous work with many distinguished authors made him a clear choice to steer this treasured institution into the future.”

“George Andreou is an ideal leader for Harvard University Press,” said William C. Kirby, the Spangler Family Professor of Business Administration at Harvard Business School and Harvard’s T.M. Chang Professor of China Studies, who chairs the press’s board of directors and who served on the search committee. “Ours is a private university with a deep sense of public mission. It is fitting that our press will be led by an exceptional man who has brought extraordinary scholarship to ever-wider audiences.”

Andreou earned his A.B. from Harvard College in 1987 in English and American literature and language. He pursued graduate studies at Yale University before decamping for the New York publishing industry. After joining Knopf in 1990 as an editorial assistant, he worked his way up the ranks and was appointed to his current role in 2005.

In 1994, Andreou co-founded Vintage Español, an imprint dedicated to publishing select works of fiction and nonfiction in Spanish for the U.S. market. Among the first authors he published there were Junot Díaz, Rosario Ferré, and Cristina García. Vintage Español would go on to become one of the largest Spanish-language publishers in the country, with authors including Isabel Allende, Roberto Bolaño, and Gabriel García Márquez.

Andreou has been on the faculty of the Writers’ Institute at the Graduate Center at the City University of New York since 2012. This unique program introduces talented writers to prestigious editors through one-year intensive courses of instruction. In addition, Andreou has lectured at other colleges and universities throughout the United States.

“I feel greatly honored to have been charged with leading Harvard University Press into its second century,” said Andreou. “The storied tradition of the press is testament to the singular creativity of its authors and staff, past and present. I thank Dr. Garber and the search committee for having entrusted that tradition to me, and I pledge myself to upholding it.”

Founded in 1913, Harvard University Press is the publisher of such classic works as John Rawls’ “A Theory of Justice,” E.O. Wilson’s “On Human Nature,” Helen Vendler’s “Dickinson,” and more recently a 2014 best-seller, Thomas Piketty’s “Capital in the Twenty-First Century.”

The press is a leading publisher of works in the natural sciences, humanities, social and behavioral sciences, business, and medicine. Its publication program, which includes major new digital projects and platforms such as the Loeb Classic Library, is driven by the belief that works from academic publishers are more essential than ever for understanding critical issues facing the world.

“These are transformational times, both in the academy and in publishing, and they present unique opportunities for prosecuting the dual mission first enunciated by my early predecessor Dumas Malone in the 1930s: to serve both the scholarly community and the serious general reader,” Andreou added. “Together with new colleagues, I look forward to devising the most effective means of doing so in the 21st century.”