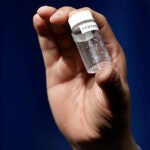 Proteins make up a wildly diverse class of molecule, with key roles in everything from catalyzing reactions to helping fight off infection to transporting oxygen through the body. Now, Harvard scientists are beginning to provide answers on drivers of that diversity.

Led by Eugene Shakhnovich, a professor of chemistry and chemical biology, and Amy Gilson, a graduate student in Shakhnovich’s lab, investigators have found that the stability of proteins plays an important role in the evolution of different protein structures. The research also suggests that the wide diversity of proteins likely evolved from a small number of ancestors.

“There are two fundamental issues we’re addressing with this paper. One is whether all the diversity we see evolved from a small number of ancestors or if these structures evolved convergently,” said Gilson, who is a doctoral candidate in chemical physics at the Graduate School of Arts and Sciences.

The second, she said, was why proteins with different sequences tend to adopt the same structure — up to a point.

Not surprisingly, proteins with identical sequences have identical structures. What is surprising, Gilson said, is that proteins that share just 30 percent of their sequence still adopt the same structure. Below that threshold, all bets are off.

To understand why that 30 percent mark is important, Gilson and Shakhnovich took an unusual step — rather than grouping proteins by family or function, they grouped them according to thermodynamic stability.

“What we see is that there is a strong threshold for the most stable proteins, but it’s much gentler for the unstable proteins,” Gilson said. “That suggested stability is important for structure evolution.”

“The idea is that very stable proteins are stable for a reason,” Shakhnovich added. “If you start to mess with them, that could hurt the organism, so they’re under strong selection to maintain that stability … and that restricts their ability to change their structure.”

Less-stable proteins, he said, face far fewer restrictions, and as a consequence are more readily able to change their structure, even if the change impacts their stability. The pressure on stable proteins to remain stable creates a threshold in their evolution.

“In the computational models we used, proteins were initially stable, and as they started to diverge, some stayed stable, but for others, it was not as important, because they were under weaker evolutionary selection for stability,” Shakhnovich said. “But the proteins that remained stable, they moved very conservatively — they did not have the luxury to change their structure, because it would lose stability.”

Understanding how the threshold works to impact protein structure evolution is important not only as a basic science question, Shakhnovich said, but because it has wide implications for homology modeling, the process scientists use to understand protein structures.

“Ideally, what scientists would like to be able to do is, determine a protein’s structure based on its sequence,” Gilson said. “We’re not at a point where we can do that, so we use homology modeling. So if there’s a protein you’re interested in, and you know the sequence but not the structure, you can build a model of its structure by templating it on a protein with similar sequence and known structure.”

From there, Shakhnovich said, researchers can focus on modeling the differences in a more systematic way.

Besides offering key insight into a fundamental question in biology, the study serves as a powerful illustration of the connection between the physical properties of proteins and the evolutionary fitness of an organism, Shakhnovich said.