New approach may kill tumor cells in the brain 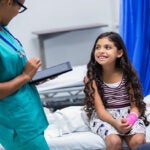 Investigators from Brigham and Women’s Hospital (BWH) and the Harvard Stem Cell Institute (HSCI) may have discovered a way to kill tumor cells that have metastasized to the brain.

The team has developed cancer-killing viruses that can deliver stem cells via the carotid artery, and applied them to metastatic tumors in the brains of clinically relevant mouse models. The elimination of metastatic skin cancer cells from the brains of these preclinical models resulted in prolonged survival, the investigators report. The study, published online this week in the journal PNAS, also describes a strategy of combining this therapy with immune checkpoint inhibitors.

“Metastatic brain tumors — often from lung, breast, or skin cancers — are the most commonly observed tumors within the brain and account for about 40 percent of advanced melanoma metastases. Current therapeutic options for such patients are limited, particularly when there are many metastases,” said Khalid Shah, director of the Center for Stem Cell Therapeutics and Imaging (CSTI) in the BWH Department of Neurosurgery, who led the study. “Our results are the first to provide insight into ways of targeting multiple brain metastatic deposits with stem-cell-loaded oncolytic viruses that specifically kill dividing tumor cells.”

In their search for novel, tumor-specific therapies that could target multiple metastases in the brain without damaging adjacent tissues, the research team first developed different BRAF wild-type and mutant mouse models that more closely mimicked what is seen in patients.

They found that injecting patient-derived, brain-seeking melanoma cells into the carotid arteries of the preclinical models resulted in metastatic tumors forming throughout the brain, mimicking what is seen in advanced melanoma cancer patients. The injected cells express markers that allow them to enter the brain and are labeled with bioluminescent and fluorescent markers to enable tracking by imaging technologies.

Previous research by Shah and his colleagues had shown that different stem cell types were naturally attracted to tumors in the brain. After first verifying that stem cells injected to the brain would travel to multiple metastatic sites and not to tumor-free areas in their model, the team injected the oHSV-laden stem cells into the carotid arteries of metastasis-bearing mice. This led to significantly slower tumor growth and increased survival, compared with the models that received unaltered stem cells or control injections.

Shah and his colleagues also developed an immunocompetent melanoma mouse model and explored treatments with both stem cell-loaded oHSV and immune checkpoint blockers such as those that target the PD-1/PD-L1 pathway. They found that PD-L1 immune checkpoint blockade significantly improved the therapeutic efficacy of stem cell-based oncolytic virotherapy in melanoma brain metastasis.

“We are currently developing similar animal models of brain metastasis from other cancer types, as well as new oncolytic viruses that have the ability to specifically kill a wide variety of resistant tumor cells,” said Shah, who is also a professor at Harvard Medical School and a principal faculty member at the Harvard Stem Cell Institute. “We are hopeful that our findings will overcome problems associated with current clinical procedures. This work will have direct implications for designing clinical trials using oncolytic viruses for metastatic tumors in the brain.”

The study was supported by a Department of Defense Idea Award and a grant from the National Institutes of Health.