Teens discover exciting side of science 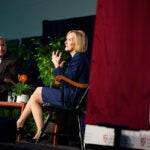 That fact — and its implications — piqued the interest of Owen Ryerson, a senior at Cambridge Rindge and Latin School (CRLS), who helped a group of researchers investigate whether local marshes are facing the same dangers.

Ryerson was one of a group of students who recently completed a marine biology internship, and presented his findings to parents, professors, students, and Cambridge School Committee member Fred Fantini at the annual year-end luncheon. CRLS partners with local universities and organizations, including Harvard, to place students in labs where they work alongside professors, postdoctoral fellows, and graduate students, and learn about career paths available in marine science.

In some cases the experience is key to changing the trajectory of a student’s life. “Having these programs to experience at an early age actually pushes people to explore things they might never have thought about before … They might ask, ‘What does science look like?’ It’s not always the guy in a coat with the crazy hair. It can be anyone. It can be them,” said Tauana Cunha, a graduate student in the Giribet Lab at Harvard. Cunha mentored CRLS senior Jesse Leon Guerrero, who studied the evolution of the gastropod.

Mihir Edulbehram, a CRLS senior, examined oyster beds. He explained that the oyster industry is booming worldwide — it brings in more than $4 billion annually. But in many places, estuaries, which often house the beds, are diminishing because of natural and man-made causes, and he looked at how local oyster beds are faring. CRLS students Grace Toner and Nina Xiaoyang McClellan explored microbial life in caves, presenting their research on microscopic eukaryotes. These organisms had never been studied in caves, and the research sheds light on the diversity of life in these subterranean habitats.

“A lot of people, including my high school self, don’t know that science can be exciting and that you can contribute at an early age to the vast amount of knowledge that we already have, but also really need to grow,” said Joey Pakes Nelson, a postdoctoral fellow in the Cavanaugh Lab at Harvard, who, along with fellow postdoc Fatma Gomaa, mentored both Toner and McClellan. “Having the opportunity to contribute to scientific endeavors when you’re younger, when you’re still able to change your path more easily, is important.”

The program in Harvard’s labs is a result of a partnership forged in 2006 between Paul McGuinness, the marine biology teacher at Rindge and Latin, and Peter Girguis, a professor in the Department of Organismic and Evolutionary Biology at Harvard. CRLS has similar partnerships with other local universities and organizations, including Tufts University, University of Massachusetts, Boston, Draper Labs, the New England Aquarium, as well as Boston University, where both Ryerson and Edulbehram interned this semester.

While understanding the subject material is certainly a key element to these internships, what is oftentimes equally important is understanding how to create methodologies, and learning the tools and processes of actually working in a research lab.

“This program fuels future scientists,” said Colleen Cavanaugh, the Edward C. Jeffrey Professor of Biology at Harvard. “It is really important for all colleges, universities, and others to participate because it’s a way of really getting students interested and excited about sciences, because it’s hands-on. They’re able to actually do their own experiments and formulate their own questions.”

“Science is so exciting and can also require skills that aren’t necessarily just mathematical or memorization,” Pakes said. “For example, you might be able to contribute with creative skills, or with your hands, or even with storytelling skills. Realizing that is really important for energizing students who might not typically go into a science field.”

McGuiness credited the mentors for the program’s success. “The mentors have gone above and beyond all semester to have the patience to work with them on their projects, share their research, and share their time with the students over the course of the semester. This program just doesn’t work without them,” he said.

McGuiness also thanked Harvard’s Public School Partnerships team, which was critical in enabling the group “to make the connections to professors and labs across campus, which in turn allows our students to have these incredible opportunities,” he said.