A mic drop for Tom Lee 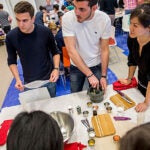 Head of Learning from Performers program departing after 23 years

Dan Hurlin doesn’t have the name recognition of Plácido Domingo, or Renée Fleming, or Lin-Manuel Miranda.

But Hurlin, an American puppeteer and playwright, is among the long list of artists who have come to Harvard to share their work and expertise with students as part of the Office for the Arts’ Learning from Performers program. He came at the invitation of program director Tom Lee, who hoped to inspire Sara Berliner ’98, a student who was running a puppet company at Harvard.

“Dan did several performances of one of his solo ‘toy theater’ puppet productions, an exquisitely detailed work based on a short story written by a friend who died from AIDS. It was quite a bold and moving statement not usually expressed via puppetry, and it galvanized the students who saw it,” Lee recalled, adding that Berliner followed up by taking a two-day workshop taught by Hurlin. When she left Harvard, she directed a puppetry festival in her home city of Chicago supported by the Jim Henson Foundation.

It’s Lee’s encyclopedic talent for finding artists like Hurlin (another was music technologist Teresa Marrin Nakra ’92) as well as attracting divas like Jessye Norman that makes his decision to step down this month after 23 years at the helm bittersweet.

“If you had told me when I was a kid that I would be hosting world-class artists at Harvard University, and facilitating their interactions with students, I would have said you were crazy,” said Lee, who plans to move back to Philadelphia to be close to family. “I had a big interest in all art forms and wanted to paint and act and sing and dance, but I realized I wasn’t quite good enough at any of them. This really has been a perfect gig.”

As Lee described it, a painful stutter gave him a “debilitating start in life.” But an English teacher who oversaw his high school drama club cast him as the Artful Dodger in “Oliver,” and that first part started him on a path to establishing his presence.

“I found when I was on stage with a cockney accent, I didn’t stutter,” he said. “So I took on more parts, and even though I eventually realized I didn’t have the talent or fire in the belly to be a professional actor or singer, it really planted a seed in me. To share that sense of confidence and risk-taking and challenging assumptions — all of that is so important in a young person.”

At Harvard, Lee has given students those same lessons 10-fold. Jack Megan, director of the Office for the Arts, calls Lee one of Harvard’s unsung heroes.

“Tom has changed lives one artist at a time. I’ve heard variations on that theme from innumerable students over the years who talk about the way in which a Learning from Performers artist transformed their thinking about their own creative process, and in many cases set them on a new career path in the arts,” he said. “He has a kind of curatorial versatility — as comfortable bringing in conductor Gustavo Dudamel to work with the Harvard-Radcliffe Orchestra as he is bringing beatboxer Reeps One to campus the very next week.”

Megan lauded Lee most for his ability to customize each performer’s visit based on his or her artistry and on student desires. Lee has assembled workshops, lectures, conferences, performances, and informal conversations, and would put as much effort into the smallest events as the ones in Sanders Theatre.

“There’s always a pressure or expectation to have a big crowd, but residencies like the one with Nakra, inventor of the ‘conductor’s jacket,’ a wearable device that analyzes and performs music in real time based on a conductor’s gestures and breathing signals, involved five or six students. Not everything has to be scaled up. If you change one student’s perception about art, that’s it,” he said.

Carol Oja, William Powell Mason Professor of Music, called Lee the “consummate collaborator,” having partnered with the series on many occasions, including a class with Broadway composer Jason Robert Brown and the 2006 “Leonard Bernstein: Boston to Broadway” conference, which featured panel discussions, performances, and master classes. Oja recalled Lee’s deft facilitation of a student concert at which a musical arrangement of “Rhapsody in Blue” was premiered as part of the conference. Ryan Banagale, a Harvard Ph.D. candidate at the time, had discovered the score, which Bernstein had arranged in the summer of 1937 for triangle, tambourine, ukulele, and other instruments that happened to be on hand while he was a camp counselor in the Berkshires.

“‘Rhapsody in Blue’ was important to Bernstein’s life, and Tom was part of the group that made that student concert happen,” Oja said. “Because of Tom’s amazing range of contacts in the performing arts and his liberal outlook, it’s been possible for students to rub elbows with illustrious performers and composers, bringing their creative energy into the intellectual life of Harvard classrooms.”

“She pulled up at Memorial Church with her brother, and I went to pick up her dress, which was in a hanger in plastic,” Lee recalled. “As I grabbed it, it fell to the ground. She just picked it up, threw it over her shoulder, and said, ‘You men. You just don’t know about these things.’ Now, that’s a class act.”

Lee recalled not a single oversized ego among the hundreds of performers who have visited. Several, such as Academy Award-winning film and musical theater composer Alan Menken, were remarkably unassuming, even self-conscious. In a master class, a handful of students presented their work to Menken. “After the first one, he leaned over to me and whispered, ‘How am I doing?’ I thought, ‘You’re doing well. You’ve always done well.’”

Among his pinch-me moments, few stand out more than a poignant master class with tap dancers Harold and Fayard Nicholas, brothers whose fabled careers spanned from Vaudeville to Broadway and movies. Of their 1996 visit, Lee recalled:

“They were in their 80s. Harold was not in great shape, and told us ahead of time that he would sit on the sidelines. As Fayard started warming up the students, Harold put on his tap shoes, and did get up to demonstrate some dance moves. That entire 90 minutes, I couldn’t believe it. They were dance royalty, and I was pinching myself.”

Lee leaves with few regrets, though being turned down by Bette Midler and never finding a dedicated space for events were disappointing. Students and alumni, however, only remember the transformative experiences Lee created for them. Playwright Michael Mitnick ’06 availed himself of many master classes and workshops with the likes of composers and lyricists Adam Guettel (“The Light in the Piazza”), Jeanine Tesori (“Fun Home”), and Stephen Flaherty and Lynn Ahrens (“Once on This Island” and “Anastasia”).

Mitnick recalled an afternoon with songwriter and singer Randy Newman as “a dream come true.”

“I learned about songwriting and film scoring — where it can help, where it’s not needed,” he said. “There was a generosity. He was passing along what he learned and believed. I was some senior in college, sitting down with the person who was a reason I wanted to write songs.”

Since then, Newman has stayed in touch with Mitnick.

“There are so many small gestures through Tom’s work that gave me the confidence to continue to want to be a writer and songwriter,” Mitnick said. “It was magical when people like Randy appeared on campus. Who were we? But they took the time, and suddenly it seemed like doing what they did wasn’t impossible. What Tom did not just for the students, but also for Harvard as a whole, was invaluable.”