Skip the fake, snag the masterpiece 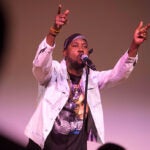 “The art market is a seductive siren, but it’s also a minefield,” said Edouard Kopp on a sunny afternoon in the Harvard Art Museums’ Art Study Center amid a selection of the museums’ works on paper.

It was sage advice for three Harvard graduate students and a curatorial fellow about to visit Paris for the world’s largest drawings fair, the Salon du Dessin, with the aim of identifying works to add to the museums’ collection. The discussion and the trip were part of a new workshop to teach future art scholars and curators how to navigate the tricky terrain of the fine art market.

For a novice about to enter the fray, preparation is key.

“There’s a lot of mystery surrounding acquisitions at museums,” said Laura Igoe, Harvard’s Maher Curatorial Fellow of American Art, who is hoping to land a curatorial position in a museum when her fellowship ends this spring. Igoe knows an important part of any such position will involve buying precious artworks, a skill typically learned “on the job.”

Kopp, the Maida and George Abrams Associate Curator of Drawings, created the workshop with support from Martha Tedeschi, the museums’ Elizabeth and John Moors Cabot Director. She remembers well her own early forays into the art-buying market as a young assistant curator, which included visits to galleries on Bond Street in London.

“It was sink or swim,” said Tedeschi. “It’s not a good feeling.”

The new workshop aims to ease such fears. For a week this spring students explored the history of art collecting, as well as the museums’ extensive collection of drawings and current collecting priorities. They met with collectors, curators, and conservators; studied how auction houses, dealers, and agents operate; and learned how to assess the condition of a drawing, how to determine its value, and, perhaps most critical of all, how to spot a fake. The workshop included close inspection of several high-quality copies.

“Imagine if you buy a forgery. Terrible,” said Kopp.

Before they left for the Paris show, the students were advised to pay close attention to materials used in a drawing. Paper inconsistent with a 17th-century piece, Tedeschi said, or a work in red chalk by an artist known for works in charcoal could be important clues in recognizing fakes. She also encouraged the group to take meticulous notes, and to view works they were interested in more than once, “particularly if you are looking at the same artist who might be represented by two different dealers.”

Pace yourselves and dress accordingly, added Tedeschi. “There is a fatigue factor, so wear comfortable shoes, even though it is Paris.”

Once in France for the four-day trip, the students didn’t waste time. After a stop at their hotel following the overnight flight, they headed out to a series of auction houses and then to the fair.

“The excitement of being thrown in the midst of it kept us going,” said Christine Garnier, a second-year graduate student in the History of Art and Architecture Department who is planning a career in academia. “I am really interested in the function of the art market. I have a background in economics and after studying issues of the interaction between artists, the market, and the market’s development in the late 19th century, I really wanted to get a good perspective on what actually happens.”

The group returned to campus with a selection of drawings for consideration based on a range of factors, including condition, price, and gaps in the museums’ collection. Next they presented their choices to Tedeschi and senior members of the museums’ leadership team. Four works were approved for acquisition, including drawings by the 20th-century Swiss sculptor, painter, and printmaker Alberto Giacometti and the 17th-century Italian painter and printmaker Salvator Rosa.

“The Giacometti work is a modern expressive drawing of four studies of heads that he had drawn on the back of a literary journal. They are very expressive, very powerful figures that are typical of his style,” said Igoe. The work fits well within the museums’ broader collection of drawings by sculptors, she added.

The Rosa drawing, in pen and brown ink, with brown wash over traces of black chalk, is a preparatory sketch for the artist’s painting “Chiron on Achilles,” and adds to an “area of the collection that we are trying to build,” said Igoe.

Ultimately the works will be part of a curated rotation at the museums developed with the students. For both the students and Kopp, the workshop was an eye-opener.

“They really got into it very, very quickly and they learned things you can’t learn anywhere else … certainly that they can’t learn in a classroom,” he said. “That was really powerful to see.”