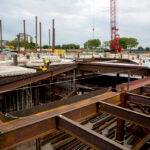 A cornerstone of Allston innovation

The researchers and chefs who make up the science and cooking team at the Harvard John A. Paulson School of Engineering and Applied Sciences bring an analytical perspective to the food we eat.

“The way we usually talk about food is about what we should or shouldn’t eat, what companies are adding to foods that are terrible for us, and the nutrition aspect,” said Tim Roth, a chemical biology graduate student in the Faculty of Arts and Sciences and a content developer and teaching assistant for the HarvardX course “Science & Cooking: From Haute Cuisine to Soft Matter Science.” “But let’s take a step back and see just what the roles of the ingredients are and how we can understand what these chemicals do.”

Mixing oil, egg, and garlic to make creamy aioli — or cooking eggs to turn them from a sticky liquid to a pliable solid — is a scientific process. And SEAS, along with HarvardX and the Harvard Ed Portal, is helping clarify that process.

“One of the most responsible ways to avoid hype or trends in food is to look at ingredients that you may not be familiar with and try to understand the mechanics of what these chemicals do,” Roth said. “This sets the groundwork for understanding the fuel that goes into our systems.”

To get a better understanding of what makes a tasty dish, Roth and chemistry and chemical biology graduate student Charles Margarit recently transformed the Harvard Ed Portal into a lab. Attendees at “The Science of Cooking: Ice Cream & Aioli” on June 7 became familiar with not just the ingredients in the recipes they tried, but also the components of those ingredients.

The workshop, taught by Roth and Margarit, was an extension of “Science & Cooking,” which is led by researchers along with prominent chefs from around the world. The free online course teaches the underlying scientific principles of food, bringing cutting-edge experiments into the kitchen. In its third offering, more than 30,000 online students are registered from more than 180 countries.

At the Ed Portal, the instructors promised an evening that would “fill up all the senses — smell, sight, taste, touch, and understanding.” Attendees sat at large tables equipped with utensils, cutting boards, mortars and pestles, graduated cylinders for accurate measuring, and premeasured ingredients.

Before they started cooking, participants learned about viscosity, volume fractions, and molecular structure. Instructors used diagrams of molecules and foods to shed light on ingredients, and peppered the audience with questions. Why does bread turn brown when it toasts? Why does salad dressing separate? Does dissolving more or less salt lower the freezing point to make ice cream?

“We love ingredients and we love how they go into our food, but to understand how to manipulate them we need to know what they’re made of, so we look at a molecular level,” said Margarit. “The other way to know about the components of food is to know how food changes as we cook it.”

Participants had the opportunity to cook collaboratively, exploring the ways ingredients come together in a stable emulsion (aioli) and a frozen emulsion (ice cream). Each 30-minute interactive lab explained the physical changes that occur within the structures of these two foods.

The experiments were difficult. To create a creamy emulsion requires a tremendous amount of arm strength, Margarit said. When he showed an image of a perfect aioli made by renowned chef Nandu Jubany, one audience member sighed and said she would have to go home and try again.

“We’ve made ice cream in the past but I don’t know anything about the science of making it and I want to enhance the kids’ knowledge base,” she said. “I don’t want to just have a cooking lesson, but also have a science lesson so I can experiment with ingredients and see what works, and this class is a great start.”

SEAS launched its science and cooking course in 2010 for science and non-science concentrators. Its popularity inspired HarvardX to develop an online version in 2013. Casey Roehrig, project lead for HarvardX, said registrations exceeded 79,000 in both 2013 and 2015.

“We have learners who are interested in how science applies to cooking, we have professionals in the food industry who utilize the course to help them think about recipes in a rigorous way, and we have people coming to the Ed Portal for an opportunity to make something and think about the science behind it,” she said. “Cooking is very experimental. People have been cooking for millions of years, but now science has brought us a different approach.”