Will business fill the Paris void? 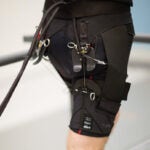 New robotic exosuit could push the limits of human performance

In addition to opposition from environmentalists, governors, and mayors, many prominent business leaders reacted with dismay to President Trump’s decision to withdraw the U.S. from the Paris climate agreement.

Members of the higher education community also recommitted to fighting climate change, with Harvard President Drew Faust among a dozen leaders of research universities issuing a joint statement this week in support of the Paris agreement and the importance of transitioning to a low-carbon economy.

Among the CEOs voicing disagreement with the president were the heads of companies whose interests clearly lie in a clean energy future, like electric cars or renewable energy. But they weren’t alone. Leaders across a range of sectors worried that the U.S. is turning its back on the future, suggesting that it may fall to the business community to lead the way on the issue.

George Serafeim, Harvard Business School’s Jakurski Family Associate Professor of Business Administration, is an expert in corporate performance and social impact, including corporate sustainability. In a Q&A, Serafeim discussed corporate views on the Trump announcement and how the Paris exit might affect U.S. competitiveness in the years to come.

GAZETTE: What was your reaction to President Trump’s announcement, and what are the important issues to think about with respect to U.S. businesses?

SERAFEIM: I was very disappointed, but at the same time not surprised, given that he has given lots of indications that he’s skeptical about it. He’s trying to distance himself, I think, from the global community and this is the primary example of the world finally getting together and achieving global cooperation.

I think what many people are worried about in business is that this is going to fundamentally decrease American competitiveness, because it’s putting the U.S., at least from a federal policy standpoint, at odds with where the world economy is going. The world economy is going toward low-carbon infrastructure … transportation systems, electricity infrastructure in the city, and so forth. This is a signal that at the federal level — not necessarily at the state level, because we have seen already that some states are drawing their own path — there’s not going to be support, and actually there’s going to be active resistance toward that low-carbon pathway.

The U.S. [would be] losing the cutting-edge technology, skills, and capabilities that could revolutionize our transportation system, that could revolutionize the fuel that we use in our cars and trucks and vehicles — whether that is electricity or hydrogen. We might lose our cutting edge when it comes to creating a decentralized, digitized, powered-by-renewables electric grid, and so forth.

‘When you have politics against science, at the end of the day science is going to win.’

GAZETTE: Do the objections of some business leaders mean they recognize that there may be costs to addressing climate change, but that they accept those costs as part of the price to modernize and to participate in this low-carbon future you’re talking about? Or do they just disagree with the president that the Paris agreement is a bad deal and bad for the economy?

SERAFEIM: I think many people disagree with that. It is not clear that it will be bad for the economy. If you actually look at the data, many economies have reduced their carbon emissions at the same time they have grown their economy, so I think that argument is just false. What’s happening is that many business leaders want to have a seat at the table [to determine] how you create institutions and policies and regulations and infrastructure to guide that low-carbon pathway forward. And with the U.S. withdrawing, you’re losing that seat at the table. You’re not actually going to be part of the conversations that are going to be happening. As a result, instead of shaping that agenda, you’re going to be on the back end of the process.

SERAFEIM: There is a lot that has already happened without government, and for a long time. You look at companies — especially large companies — that have committed to long-term contracts to purchase renewable energy. You see many auto manufacturers making tremendous investments for electrification of their models and so forth. The world is moving on and, personally, that’s what I’m worried about from a U.S. competitiveness standpoint.

GAZETTE: Was there anything that you heard from members of the business community that surprised you? A particular leader who spoke out and you didn’t expect it, such as Tesla’s Elon Musk stepping down from presidential advisory councils?

SERAFEIM: Elon Musk is running a giant solar company, and denying the fact that solar is going to be a big part of our energy revolution is just incompatible with everything that he represents. So that completely makes sense. I saw Jeff Immelt from General Electric and that makes a lot of sense. General Electric has a huge business that has to do with the energy revolution.

But at the same time, I saw someone like Lloyd Blankfein from Goldman Sachs coming out and saying this is the wrong path forward. The business importance is less obvious for Goldman Sachs compared to a company like General Electric or Tesla. That gives me a sense that many business leaders are worried not only about their companies, but about the nation overall, and at the end of the day, about the world.

GAZETTE: I also want to ask you about the shareholder action at the ExxonMobil annual meeting last week. They apparently pushed through a requirement that the company report on the impact of measures to keep climate change to 2 degrees Celsius. We hear about shareholder activism now and again, but how rare is this, and is this particular action significant?

SERAFEIM: This is huge, in my opinion. Such climate-related resolutions have been filed for many, many years now, but you never heard of them because they were basically ignored. People are realizing the huge investments that companies might be making to develop carbon-intensive assets, with long payback periods and high marginal costs, might become stranded assets. They might not be economically viable projects anymore. [Investors] are asking for information about the resilience of the asset and the rationale for those investments in a world compatible with a 2-degree scenario. I think that’s very reasonable because at the end of the day it speaks to asset quality. It speaks to how good a steward management is of the asset and it speaks to the resilience of the company to be able to compete in a low-carbon world. So what you are finding this year is that a huge moment has arrived where finally investors and their proposals on climate-related topics have received majority support in more than one oil and gas company. [They are] asking for this information that allows for better modeling of the risks that these companies are exposed to. That is a recent development.

GAZETTE: Just to help people interpret this, we’re not talking about a climate activist effort to harass the company, but rather a level-headed examination by investors of what this company is really going to be worth 20 years down the road, particularly if demand for their product goes down.

SERAFEIM: Absolutely. If you’re an index fund, for example, you’re going to hold this company for a very long time. So what they’re asking is: You’re spending on exploration and production this year, $15 billion, $10 billion, $20 billion — whatever that number is — and is this money well spent? Is this money completely wasted? Will you be able to compete in the future? Are you investing in technologies that are going to make you competitive in the future? And so forth. So it’s a huge moment, I think, for changing mindsets inside companies, inside boardrooms, boards of directors. Because those shareholder proposals were opposed by the board of directors. The investors voted against the recommendations of the board of directors. At the same time, it’s completely consistent with a rigorous investment analysis that requires you to have a model about how risks are going to unfold.

GAZETTE: How influential can shareholders be? Can they redirect the company’s actions?

SERAFEIM: Those proposals are advisory in nature. They’re not binding. But it’s a very strong signal that your investor base wants you to take action in a particular way. In most of the cases when this happens — you have majority support from the investors — the company acts on that. My expectation is that companies are really going to act on this. I would be surprised if they just ignored it. It has become such a strong business issue, it’s hard for anybody to ignore.

Interview was edited for clarity.