30 years of the Safra Center 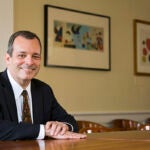 A student intern learns about ethics, and the evolving issues surrounding them

I spent last summer in an office, but not like the ones in which many of my classmates found themselves. I worked as a research intern at the Edmond J. Safra Center for Ethics, a leading facility for research in practical ethics. Over the course of the past two semesters, the Safra Center has been celebrating its 30th anniversary, and it just closed the year in an appropriate fashion with 2½ days of festivities, including lectures, panels, and discussions on various issues with which it has been involved.

A good deal of my work at the center, aside from my own research, factored into the center’s preparations for its birthday. For about four weeks, another intern and I delved into the center’s extensive archives. Together, we cataloged all the public lectures, conferences, symposia, and the like that the center has hosted and recorded. Once all this information was all neatly organized on a spreadsheet, we began working our way through the material and taking extensive notes.

By the end of this process, I had listened to almost 100 hours of lectures spanning the center’s existence. It was an extensive and often exhausting few weeks, but I was engaged by the variety of topics and recorded speakers, who discussed topics ranging from human cloning to the morality of pornography.

That summer made me one of the people most intimately acquainted with the center’s history and activities. But one person who is far more knowledgeable is its founding director, Dennis Thompson. Currently the Alfred North Whitehead Professor of Political Philosophy Emeritus in the Faculty of Arts and Sciences and at Harvard Kennedy School, Thompson was lured to Harvard by then-President Derek Bok in 1986. At the time, there were few courses or faculty members at Harvard devoted to teaching practical ethics.

Supported by notable faculty members such as Martha Minow and Michael Sandel, Thompson was able to develop what was then an interfaculty initiative, originally named the Program in Ethics and the Professions, and broaden it into the research center. Thompson established the senior fellowship program and welcomed a number of distinguished guest lecturers, including Lani Guinier, the Bennett Boskey Professor of Law, who discussed Civil Rights; Henry Louis Gates Jr., the Alphonse Fletcher Jr. University Professor and director of the Hutchins Center, who gave a lecture on “Ethics and Ethnicity” in 1999; and Nobel laureate Amartya Sen, the Thomas W. Lamont University Professor, who discussed social identity in a 2000 address.

In 2009, the leadership of the center was taken over by Lawrence Lessig, the Roy. L Furman Professor of Law and Leadership at Harvard Law School. In line with the mission of his 2016 presidential run, Lessig refocused the center’s research and efforts toward the theme of institutional corruption, pointing at the perversion of incentives structures in politics, but also in medicine, business, and academia.

Lessig invited an array of speakers ranging from politicians such as former Louisiana Gov. Buddy Roemer and U.S. Rep. Jim Cooper, who offered contrasting visions of how Congress can become more effective, to medical professionals such as Marcia Angell, the first woman to head the New England Journal of Medicine, who lamented the increasingly cozy relationship between doctors and the pharmaceutical industry. In 2013, the center launched a fellowship geared toward undergraduates that brings eight to 10 students together in an interdisciplinary seminar led by Professor Arthur Applbaum, supporting their senior thesis research.

Since 2015, the center has been directed by Danielle Allen, a faculty member in the Government Department and the recently named James Bryant Conant University Professor. Under Allen’s leadership, the center has again reoriented its activities to focus on contemporarily relevant themes such as “Diversity, Justice, and Democracy” and “Policing and Militarization.” The center has welcomed speakers such as Cornel West, Peter Singer, and Jeremy Waldron. It has also initiated a fellowship in partnership with the Berggruen Institute’s Philosophy and Culture Center, which supports scholars whose work is of “broad social and political importance from cross-cultural perspectives.”

At the anniversary celebration, many of the center’s past associates returned for discussions. For Allen, the event was a major highlight of her tenure. “We had hundreds of alumni coming back, and truly extraordinary panels,” she said in an email. “The conversation between Zeke Emanuel and Frances Kamm about ethics and the end of life was a once-in-a-lifetime event, an exhilarating journey to the heights of philosophical precision and through the entangled world of complex moral decision-making.”

The celebration also brought three Harvard presidents together is, which, Allen wrote, “a rare occurrence. It was wonderful to have the chance to listen to President Drew Faust reflect on the place of universities in our broader civic life with former presidents Derek Bok and Neil Rudenstine there, each instrumental in launching the Ethics Center to a place where it can connect academic conversations to practical, applied, and public discussions.”

Allen said the celebration also marked a “coming period … of renewal.” She believes that, as “many of the faculty who originally launched the Ethics Center have recently retired or will soon retire … the time has come to launch a conversation about what shape next-generation collaboration around ethics at Harvard University should take.”

To that end, Allen is leading the center in “redoubling efforts to strengthen and expand the ethics curriculum at Harvard, to understand and support ethics curricula on college and university campuses nationally, to support efforts to reinvigorate civic education in the U.S., and to expand the purview of discussion to a global context by means of sponsoring comparative work that draws ethical traditions from around the globe into conversation with one another.”