A cornerstone of Allston innovation 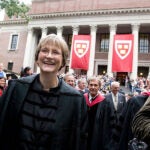 Western Avenue in Allston has been a hub of development in recent years. In addition to new facilities at Harvard Business School and innovation labs dotting the corridor, the progress being made on Harvard’s Science and Engineering Complex is a clear reminder of big things still to come.

This flagship of the University’s expanded campus across the Charles River will not only serve as an academic home to more than 1,800 students, researchers, and faculty — the majority of whom account for roughly two-thirds of the Harvard John A. Paulson School of Engineering and Applied Sciences (SEAS) — but will also provide the latest node in a network of Harvard spaces dedicated to testing ideas and incubating enterprises.

The Maker Space, a 5,000-square-foot street-level workshop, will offer high-end manufacturing and assembly workstations outfitted with state-of-the-art equipment, available to Harvard creators of all skill levels. The space will include several facilities clustered together to encourage interaction among its users and accommodate diverse demands for equipment. Once the facility is completed in 2020, it will be open to the entire Harvard community.

“Allston has become a hub for innovators and entrepreneurs from across the University, and the new Maker Space will provide yet another outlet for the skill and imagination of the Harvard community,” said Harvard President Drew Faust. “We look forward to seeing the ideas of engineers, designers, artists, and so many other creators realized in the heart of our expanding campus.”

The facility will also offer an active-learning classroom with spaces for students to work on and store long-term projects, and will complement the entrepreneurial efforts under way in Allston at the Business School, three labs (Innovation Lab, Launch Lab, Life Lab), and the developing enterprise research campus.

Frank Doyle, the John A. Paulson Dean of SEAS, said: “With the Science and Engineering Complex, Harvard’s fastest growing School will have a home in Allston that better connects our students and faculty, our University, and the community. From the day those doors open, the Maker Space facilities will be a catalyst for discoveries and inventions we cannot even imagine today.”

Support for the space has been provided by the Cihang Foundation, a philanthropic organization founded by HNA Group in 2010 to broaden the company’s commitment to society and social responsibility. Since its founding in 1993, HNA Group has evolved from a regional airline based on Hainan Island in southern China into a global Fortune 500 company focused on tourism, logistics, and financial services. The Cihang Foundation has supported a number of educational efforts, including the UNESCO Global Partnership for Girls’ and Women’s Education. Adam Tan, CEO of HNA Group, sees the space as a catalyst for creativity.

During a recent visit to Allston, Tan and other HNA representatives met with Faust, Doyle, and HBS Dean Nitin Nohria.

“Incubation space plays a vital role in bringing enterprises to market,” Tan said. “Harvard is already a global leader in research and discovery, and the Maker Space will empower their talented community of students, faculty, and researchers to propel inventions and innovations for the benefit of all. With its gift to the Maker Space, the Cihang Foundation furthers its mission to give back and echoes HNA Group’s core values of innovation, integrity, and excellence in performance.”