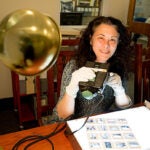 'Where the Roads All End' is where story begins

Hub of art, science, and ideas is re-created at Harvard Art Museums

Five years ago, when Harvard’s Ethan Lasser began examining the history of a series of portraits by the American painter John Singleton Copley, something odd caught his eye.

“That name just grabbed me,” said Lasser, of repeated references in the records to the enigmatic space where the works once hung. “It was so intriguing and curious that I pursued it and I quickly found this huge, untapped archive about this room — what happened in it, who visited it, and most importantly, what it held.”

So began a multiyear treasure hunt to track down as much of the room’s original material as possible — part of an effort to re-create the stories of collecting and scholarship that collided inside the Philosophy Chamber. Located in Harvard Hall in the late 18th and early 19th centuries, the room was the largest of three in the building dedicated to teaching College students through a vast collection of art, scientific instruments, plant and mineral specimens, indigenous American artifacts, and ancient relics.

The space was renowned for its wide-ranging collections, said Lasser, the Theodore E. Stebbins Jr. Curator of American Art, whose 2014 graduate seminar about the room, co-taught with Professor Jennifer Roberts, was the basis for an exhibition that reunites a portion of the original contents under one roof. The show, on view at Harvard Art Museums starting May 19, captures the quirky nature of the College’s earliest days of collecting and teaching and offers important insights into the history of the nation and the University.

“The Philosophy Chamber: Art and Science in Harvard’s Teaching Cabinet, 1776-1820” includes a re-creation of the space down to the red-flocked wallpaper donated in 1772 by 1754 graduate John Hancock. Among the highlights of the more than 100 items on display are Harvard Professor Stephen Sewall’s 1768 mural-sized copy of the Wampanoag inscription on Dighton Rock, a 40-ton boulder once located in the Taunton River and today in Berkley, Mass., and an elaborate orrery (a model of the solar system) created by clockmaker Joseph Pope between 1776 and 1787 and decorated with statuettes of Benjamin Franklin, then-Massachusetts Gov. James Bowdoin, and Sir Isaac Newton.

As curator of the exhibit, Lasser worked with a team of scholars from across the University to track down the Philosophy Chamber’s forgotten treasures. The effort moved from Harvard’s museums and collections to public and private institutions in the United States and abroad.

The Philosophy Chamber was “less like a museum or gallery and more like a lab,” said Lasser. “There are so many activities and so much debate and discussion and so much hands-on encounter with the objects.”

In addition to its blend of art, science, and instruction, the Philosophy Chamber was home to regular meetings of the Harvard Corporation and the Board of Overseers, as well as an annual gathering of the American Academy of Arts and Sciences. Visitors included foreign dignitaries, scholars, and statesmen, among them George Washington and John Adams.

“This room was more than a museum of objects,” said Lasser. “It was also a real site of artistic and scholarly life in early America: artists, scholars, revolutionaries, scientists. A kind of who’s who of early American culture passed through the room.”

But darker currents, reflective of the scholarship and sentiment of the times, also ran through the chamber. Included in the exhibit are six skull drawings by Harvard professor and naturalist William Dandridge Peck that supported the theory of racial hierarchy based on facial angles, which were likely used for instruction in the room. The many false interpretations of the Dighton Rock inscription, today attributed to the Wampanoag Indians who lived in the region, repeatedly ignored Native American history. And the chamber, a setting for discussions about the legality of slavery, included objects from merchants and Harvard alumni who profited from the slave-based economies in the South and in the Caribbean.

Inside the Philosophy Chamber

“On the one hand people are gathering together for the pursuit of knowledge and there are lots of important observations that take place,” said Lasser. “But on the other hand, it’s a place for white men. Access is quite limited, and some of the things they are pursuing as scholarship and the debates they are having are really challenging to deal with today.

“It seemed important not to erase that part of this room.”

Ultimately, the chamber’s lack of any master plan or organizing principle, the very thing that helped drive its popularity, hastened its demise. In 1820, when the College library needed more space for its expanding collection of books, there was no “mind behind the space” to fight for its preservation, said Lasser. The room’s materials were dispersed to separate departments and collections around Harvard.

Yet the interdisciplinary nature of the Philosophy Chamber lives on in the new exhibition and throughout the campus. Harvard has embraced the practice of teaching with its various collections, and the reimagined Harvard Art Museums were renovated and expanded in large part to help bring the arts and sciences into greater dialogue and help promote hands-on instruction and experimentation.

“The Philosophy Chamber was this kind of buzzing space of scholarly activity around this collection,” said Lasser, “which is not unlike what we hope this museum will be.”

On May 23 at 3 p.m. at the Harvard Art Museums Jane Kamensky, Harvard history professor and the Carl and Lily Pforzheimer Foundation Director of the Schlesinger Library on the History of Women in America at the Radcliffe Institute for Advanced Study, will discuss Copley’s views on pre-revolution Boston, in a free lecture in conjunction with the Philosophy Chamber exhibition.

In honor of Class Day and Commencement, admission to the Harvard Art Museums is free on May 24 and 25.