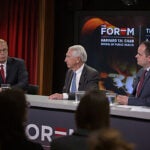 The kidney, made up of about a million tiny units that work to filter blood, constantly rids the body of undesired waste products to form urine. During the process, it also holds back blood cells and valuable proteins and controls the body’s fluid content.

Key to each of these units is a structure known as the glomerulus, in which so-called podocyte cells wrap themselves tightly around a tuft of capillaries. Separated by a thin membrane composed of extracellular matrix, slits are left between them to build an actual filtration barrier. The podocytes are also the target of congenital or acquired kidney diseases, however, they are often harmed by drugs.

In order to build an in vitro model of the human glomerulus that could allow better understanding of its function, vulnerabilities to disease, and drug toxicities, researchers have been attempting to engineer human stem cells — which in theory can give rise to any mature cell type — to form into functional podocytes. These cell culture efforts, however, so far have failed to produce populations of mature podocytes pure enough to be useful for modeling glomerular filtration.

A team led by Donald Ingber at Harvard’s Wyss Institute of Biologically Inspired Engineering now reports a solution to this challenge in Nature Biomedical Engineering. Their process enables differentiation of human induced pluripotent stem (iPS) cells into mature podocytes with more than 90 percent efficiency. Linking the differentiation process with organ-on-a-chip technology pioneered by Ingber’s team, the researchers went on to engineer the first in vitro model of the human glomerulus, demonstrating effective and selective filtration of blood proteins and podocyte toxicity induced by a chemotherapy drug in vitro.

“The development of a functional human kidney glomerulus chip opens up an entire new experimental path to investigate kidney biology, carry out highly personalized modeling of kidney diseases and drug toxicities, and the stem cell-derived kidney podocytes we developed could even offer a new injectable cell therapy approach for regenerative medicine in patients with life-threatening glomerulopathies in the future,” said Ingber, who is director of the Wyss Institute.

Ingber’s team has engineered multiple organs-on-chips that accurately mimic human tissue and organ-level physiology and are currently being evaluated by the Food and Drug Administration as tools to study the effects of potential chemical and biological hazards found in foods, cosmetics, or dietary supplements more effectively than in existing culture systems or animal models. In 2013, his team developed an organ-on-a-chip microfluidic culture device that modeled the human kidney’s proximal tubule, which is anatomically connected to the glomerulus and salvages ions from urinary fluid. Now, with the glomerulus-on-a-chip, researchers also can get in vitro access to core filtration mechanisms in the kidney that are critical for drug clearance and pharmacokinetics, in addition to studying human podocytes at work.

To generate almost pure populations of human podocytes in cell culture, Samira Musah, the study’s first author and Harvard Medical School (HMS) Dean’s Postdoc, leveraged pieces of the stem cell biologists’ arsenal and merged them with snippets taken from Ingber’s past research on how cells in the body respond to adhesive factors and physical forces in their tissue environments.

“Our method not only uses soluble factors that guide kidney development in the embryo, but, by growing and differentiating stem cells on extracellular matrix components that are also contained in the membrane separating the glomerular blood and urinary systems, we more closely mimic the natural environment in which podocytes are induced and mature,” said Musah. “We even succeeded in inducing much of this differentiation process within a channel of the microfluidic chip, where, by applying cyclical motions that mimic the rhythmic deformations living glomeruli experience due to pressure pulses generated by each heartbeat, we achieve even greater maturation efficiencies.”

The complete microfluidic system closely resembles a living, 3-D cross-section of the human glomerular wall. It consists of an optically clear, flexible, polymeric material the size of a computer memory chip in which two closely opposed microchannels are separated by a porous, extracellular matrix-coated membrane that corresponds to the kidney’s glomerular basement membrane. In one of the membrane-facing channels, the researchers grow glomerular endothelial cells to mimic the blood microvessel compartment of glomeruli. The iPS cells are cultured on the opposite side of the membrane in the other channel that represents the glomerulus’ urinary compartment, where they are induced to form a layer of mature podocytes that extend long cellular processes through the pores in the membrane and contact the underlying endothelial cells. In addition, the device’s channels are rhythmically stretched and relaxed at a rate of one heartbeat per second by applying cyclic suction to hollow chambers placed on either side of the cell-lined microchannels to mimic physiological deformations of the glomerular wall.

“This in vitro system allows us to effectively recapitulate the filtration of small substances contained in blood into the urinary compartment while retaining large proteins in the blood compartment just like in our bodies, and we can visualize and monitor the damage inflicted by drugs that cause breakdown of the filtration barrier in the kidney,” said Musah.

Other authors include Akiko Mammoto and Tadanori Mammoto, who at the time of the study were instructors in the Vascular Biology Program and Department of Surgery at Boston Children’s Hospital, as well as present or past Wyss Institute researchers including Thomas Ferrante, Sauveur Jeanty, Kristen Roberts, Seyoon Chung, Richard Novak, Miles Ingram, Tohid Fatanat-Didar, Sandeep Koshy, and James Weaver. Ingber is the Judah Folkman Professor of Vascular Biology at Harvard Medical School and the Vascular Biology Program at Boston Children’s Hospital, as well as professor of bioengineering at the Harvard John A. Paulson School of Engineering and Applied Sciences.