Making rhyme and reason speak for him 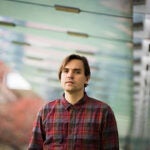 Obasi Shaw’s thesis is an exploration of rap’s meaning

As a boy growing up in Atlanta, Obasi Shaw ’17 listened exclusively to Christian rap, a little-known genre that features songs of faith and salvation with positive messages and clean lyrics.

Then, about two years ago, Shaw listened to Kendrick Lamar and Chance the Rapper, mainstream rappers who have achieved popular and critical success with poignant songs about the contemporary struggles of blacks in America. And over time, Shaw has grown to admire both men’s artistry and their willingness to delve into “questions of race, religion, and black identity” — admiration that found its way into Shaw’s senior thesis.

That meant, to Shaw, recognition of rap as an art form, one as valid as poetry. Developed in the 1970s by blacks in working-class neighborhoods of New York as a response to their marginalization from society, rap is strongly rooted in the African oral tradition.

“Some people don’t consider rap a high art form,” said Shaw on a recent afternoon at a coffee shop near campus. “But poetry and rap are very similar. Rhyming poems were very common in old English poetry.”

Shaw has a fondness for writing and said old English literature had influenced his album. His thesis adviser, Josh Bell, Briggs-Copeland Lecturer in English, agreed.

“Obasi’s album is very interesting because it uses Geoffrey Chaucer’s ‘Canterbury Tales’ as an intellectual overlay,” said Bell, who teaches poetry workshops at Harvard. Shaw “is telling stories in each song from different points of view, and it’s critical of American society and racial politics. But above all that, it’s a fun and interesting album.”

Brimming with energy in its vivid lyrics and catchy beats, the album offers a broad sweep of the history of African-Americans’ quest for equality. The songs deal with issues ranging from slavery to police brutality, from segregation to the Black Lives Matter movement, from mass incarceration to Barack Obama. Shaw wrote the songs over the course of last year and recorded them at Quad Sound Studios. He collected beats from friends or online.

The album’s title, “Liminal Minds,” plays on the phrase “criminal minds,” said Shaw. But more than anything, it refers to the in-between state of blacks in this country: free but often marginalized, free yet not equal.

“Black people in America are kind of caught between freedom and slavery,” he said. “They’re free, but the effects of slavery still exist in society and in people’s subconscious. Each song is an exploration of black liminality, that state between slavery and freedom.”

In the opening song, “Declaration of Independence,” Shaw sings, with a haunting beat in the background, about the incidents of police violence against black men and finds fault in the whole system.

Composing like Beethoven, to the deaf, or just the hard of hearing —
Complacent faces, vacant breasts, bereft of all the feeling.
A nation due for inspection, this is the audit, herein
Lies the fear in the eyes of our departed dearly —
Cold bodies facing .22, man in blue.

In the closing song, “Open Your Eyes,” Shaw strikes a more optimistic tone when he focuses on the progress gained by African-Americans with resilience, courage, and hope in their struggle for rights.

Just watch the thrones, our people are known
For making history of the impossible.
From rap to White House, we unstoppable.
Jumping Jim Crow to playing Oscar roles.

Writing rap songs is similar to writing stories or essays, or even code, said Shaw, who has a secondary in computer science. But in rap he found his voice and the right vehicle to express his blackness. He said he still favors Lamar and Chance because they claim to be Christian, but also because they’re willing to sing about issues that are central to the African-American experience such as racism and the legacy of slavery.

The idea of writing a rap thesis was serendipitous. Shaw had started rapping at a summer Bible camp in Tennessee, but didn’t take it seriously until the deadline to submit his senior thesis proposal found him without a compelling idea. His mother suggested, “Why don’t you write a rap thesis?”

In preparation, Shaw listened to mainstream rap, much of which he didn’t like for its explicit lyrics, violence, and misogyny, and read about rap’s history. “I needed to learn what rap has meant to people for decades,” he said.

Having his parents’ support in his intellectual endeavors is precious to Shaw. Both are Harvard graduates, and they homeschooled their son. His Christian upbringing, said Shaw, gave him his moral compass.

Shaw was managing editor of the Harvard Ichthus, a journal of Christian faith produced by undergrads, and a member of the Christian group Harvard Faith and Action.

After graduation, Shaw will move to Seattle for a one-year internship in software engineering. As for rap, he’ll keep it as a treasured hobby.

“Rap is a genre in which I can say everything I want to say,” Shaw said. “I’ve been writing in different capacities, but I never felt that I found my art form until I started rapping.”