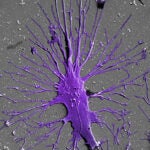 When the Black Death swept across Europe in the 14th century, it not only killed millions, it also brought lead smelting, among many other commercial activities, to a halt.

That cessation is reflected in a new analysis of historical and ice core data, which researchers say provides evidence that the natural level of lead in the air is essentially zero, contrary to common assumptions.

“These new data show that human activity has polluted European air almost uninterruptedly for the last [about] 2,000 years,” the study’s authors say. “Only a devastating collapse in population and economic activity caused by pandemic disease reduced atmospheric pollution to what can now more accurately be termed background or natural levels.”

The work, an interdisciplinary collaboration led by historians and climate scientists at the Initiative for the Science of the Human Past at Harvard University and the Climate Change Institute at the University of Maine, matched new high-resolution measurements of ice core lead taken from a glacier in the Swiss-Italian Alps with highly detailed historical records showing that lead mining and smelting plummeted to nearly zero during the plague years of 1349 to 1353.

The study, which also involved collaborators from Heidelberg University and the University of Nottingham, shows that lead levels declined precipitously in a section of the ice core corresponding to that four-year window, a drop unique in the past two millennia of European history, according to Alexander More, a postdoctoral fellow in Harvard’s History Department and the Initiative for the Science of the Human Past. More is first author of the research paper, to be published this week in the American Geophysical Union journal GeoHealth. 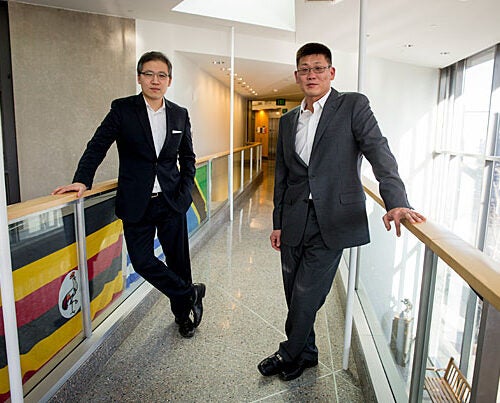 The authors challenge assumptions that widespread environmental pollution began with the Industrial Revolution in the 1700s and 1800s, and that lead detected before that era represents natural or background levels. The new research shows that lead from mining and smelting — which has occurred for thousands of years — was detectable well before the Industrial Revolution, and that only when those activities were essentially halted by the plague did lead pollution decline to natural levels.

“When we saw the extent of the decline in lead levels, and only saw it once, during the years of the pandemic, we were intrigued,” More said. “In different parts of Europe, the Black Death wiped out as much as half of the population. It radically changed society in multiple ways. In terms of the labor force, the mining of lead essentially stopped in major areas of production. You see this reflected in the ice core in a large drop in atmospheric lead levels, and you see it in historical records for an extended period of time.”

The research, backed by the Arcadia Fund of London, the W.M. Keck Foundation, and the National Science Foundation, was enabled in part by the development of a cutting-edge laser facility to analyze ultrathin layers of ice. Designed and operated at the University of Maine’s Climate Change Institute, the facility can analyze layers thin enough to coincide with sub-annual time periods, even in highly compressed ice. Institute researchers Nicole Spaulding and Pascal Bohleber, among other co-authors, produced and analyzed millions of data points from the ice core.

“This research represents the convergence of two very different disciplines, history and ice core glaciology, that together provide the perspective needed to understand how a toxic substance like lead has varied in the atmosphere and, more importantly, to understand that the true natural level is in fact very close to zero,” said Paul Mayewski, a co-author of the new study and director of the Climate Change Institute. “Using the ultrahigh resolution ice core sampling offered through our W.M. Keck Laser Ice Facility, we expect to be able to offer new insights, previously unattainable with lower-resolution sampling, into the links between climate change and the course of civilization.”

The researchers focused on lead not only because it is a hazardous pollutant, More said, but also because it serves as a proxy for economic activity, ramping up when the economy is growing and tapering when it declines.

“Lead is one of the most dangerous pollutants in the air, and one we’ve mined for a very, very long time,” he said. “It was ubiquitous in the preindustrial world, widely used in construction, pipes, currency, and everyday utensils.”

Michael McCormick, Harvard’s Francis Goelet Professor of Medieval History and chair of the Initiative for the Science of the Human Past, and Christopher Loveluck of the University of Nottingham, a former visiting professor at Harvard, also contributed to the research, providing archaeological and historical expertise. McCormick said that undergraduates played a role in the work by building a database of historical climate records.

The research highlighted other, lesser drops in ice core lead accumulation, including one in 1460 that also may have been due to an epidemic-related downturn, and another in the 1970s as abatement policies phased out leaded gasoline and other sources of air pollution.

Philip Landrigan, dean of global health for the Icahn School of Medicine at Mount Sinai Medical Center in New York, who has studied the epidemiology of lead poisoning in children, said that the work highlights today’s good news-bad news situation regarding environmental lead.

While widespread contamination due to leaded gasoline, lead paint, lead solder, and other common modern-era applications has been curbed by government regulation, the recent crisis of tainted water in Flint, Mich., shows that lead continues to poison children in America and elsewhere. One recent estimate, said Landrigan, who did not participate in the new findings, holds that some 535,000 American children under age 6 have elevated blood lead levels. Both the World Health Organization and the Centers for Disease Control and Prevention have determined that no level of lead can be considered safe for children.

“Lead is toxic to the brain at extremely low levels,” said Landrigan, who, while working with the CDC in the 1970s, investigated lead poisoning in children near a Texas lead smelting plant. “It’s clear that lead has lasting effects on children’s lives.”

More said the ice core, taken by a team with members from the University of Maine, University of Heidelberg, and University of Bern from the Colle Gnifetti glacier high in the Alps, remains rich with data, accessible due to the precision of the Climate Change Institute’s next-generation laser facility. Combining that data with historical sources and established methodologies, More said, could lead to new discoveries in climate science, human and planetary health, and economic history.