Speaking the language of sympathy 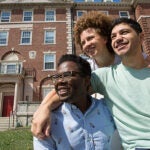 Learning to let it fly

Bennett Capozzi ’17 experiences the refugee crisis and answers in Arabic

Fleeing war in Syria, Iraq, and Afghanistan and dislocation across the Middle East, tens of thousands of people sailed the Aegean Sea in flimsy boats trying to reach Europe, generating the world’s worst refugee crisis since World War II.

More than 4,500 miles away, Bennett Capozzi ’17 felt compelled to do something.

The Winthrop House resident contacted Emergency Response Centre International, an organization in Greece that provides humanitarian aid to refugees, and offered to volunteer. After he secured funding for a six-day trip during January term, he traveled by himself to the island of Lesvos (also known as Lesbos), a gateway to Europe because of its strategic location.

A Spanish volunteer collected Capozzi and two German volunteers from the airport and took Capozzi to the Kara Tepe refugee camp, which houses about 700 people, including children and families. With other volunteers, Capozzi took part in building a theater, patrolling the camp, and search-and-rescue operations for refugees making the perilous sea crossing at night.

It was a sobering experience for Capozzi, a History & Literature concentrator who grew up in a close-knit family in Wellesley, a well-to-do suburb of Boston. It taught him to count his blessings, he said, and develop compassion for the suffering of others.

“I realized how privileged I am,” said Capozzi. “But it also made me think that … in another life, I could have been making this journey.”

Capozzi now ponders a career in government or public policy that might serve to help some of the millions of refugees in the Middle East region.

“In the long term, I’d like to work shaping policy in the region,” he said, “because I think that our country and the world aren’t going to be safe or stable until we address the pressing issues in the Middle East.”

To be better prepared, Capozzi will begin studies in January at the Qasid Arabic Institute in Amman, Jordan. There, he plans to hone his Arabic, which he learned at Harvard. His proficiency in modern standard Arabic has allowed him to follow the news on Al Jazeera and read “Harry Potter and the Goblet of Fire” in Arabic. At the institute in Amman, he hopes to gain fluency in Levantine spoken Arabic, which includes dialects spoken in Syria, Jordan, Lebanon, and the Palestinian territories.

In the interim after graduation, Capozzi will work with Boston Foods, a group founded at the Harvard Innovation Lab (i-lab). Run by students, the group assembles and distributes healthy, low-cost food packages to low-income families in metro Boston.

Capozzi’s stint at Boston Foods will be covered by the Pforzheimer Public Service Fellowship, which Harvard offers to students who want to pursue public service in the year after graduation.

Boston Foods aims to fight food insecurity and obesity, serving about 70 families at five community centers, Capozzi said. “It provides a much-needed service and gives me an opportunity to engage with communities outside of the Harvard bubble.”

Among his memorable experiences inside the bubble was a visit to his literature class by Nobel laureate Toni Morrison; his time on the varsity sailing team; his work as a Harvard tour guide; and the moments he spent with his group of eight close friends watching movies, playing cards, or just hanging out.

“There is a lot of room for people to be goofy and have fun,” Capozzi said of his best memories. “You have to remember you’re 20 years old and you don’t need to have everything planned out.”

A highlight of Capozzi’s Harvard experience was his time was at the Crimson Key Society, a student group that gives Harvard’s official historical tours to guests and the public. He said the best part was sharing his excitement about the college with strangers, and seeing the surprise on their faces when they learn unexpected facts about the nation’s oldest university.

One of Capozzi’s favorite moments is when he leads visitors into Memorial Hall, the imposing Victorian Gothic building on Quincy Street that commemorates Harvard students who fought in the Civil War. Visitors are always impressed by its marble floors, stained glass windows, and black wood paneling.

Visitors are also struck by Annenberg Hall, the freshman dining hall, which resembles Hogwarts’ Great Hall in the Harry Potter series. “You can hear a collective gasp,” said Capozzi. “People go, ‘Ahhh, this is so cool.’”

On a recent afternoon, Capozzi’s group included his mother, who came with two friends to tour campus for the first time. Capozzi said his mother not only learned “a new historical side” of Harvard, “she saw what I have been doing for four years.”

And the years ahead? Capozzi hopes polishing his Arabic will better equip him for work helping refugees from the Middle East.

“I’m increasingly interested in working in government or some sort of public policy role. In the long term, I hope to come back to the United States after having worked in the Middle East and North Africa. The other day, I went to listen to Samantha Power [U.S. ambassador to the United Nations from 2013 to 2017]. We need more people like her.”