He set the stage for change 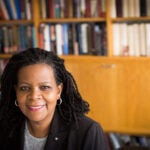 When he was 14, David Coletti dreamed of a different life. It had him studying every language he could, traveling the world, “making an impact” — and Harvard playing a big role.

For four years, the Quincy native has worked to breathe life into that dream. Coletti got into the school he hoped for, and here he has become a peer adviser, a volunteer with Philips Brooks House Association (PBHA), a traveler, a conversationalist (and listener) in Spanish, Portuguese, and Italian, and a student of history and literature determined to break down barriers and foster connections.

After graduation in May, he will work for a Manhattan law firm in international litigation with Spanish- and Portuguese-speaking countries.

It’s a good fit for the Kirkland House senior who loves communication. But expressing himself didn’t always come easy.

As a young boy Coletti battled self-esteem issues fueled by trouble at home. His mother suffered from drug addiction, and his parents divorced when he was 9. His father and stepmother gained custody when he was 12 and encouraged him to try acting to help him boost his self-confidence. After a false start at a local theater, Coletti gave it another try at school. He was a natural.

His comfort on stage translated into public speaking and student government roles in high school. But he struggled again junior year. There, in a Catholic boys’ school, and amid the pressures of college exams and applications, he came out.

“It was a very dark time for me,” he recalled. “A lot of this stuff I kept to myself.”

Coletti credits counseling, medication, and support from family, friends, and the school’s guidance department for helping him and inspiring him to stop hiding.

“I realized I didn’t need to pretend to be something that I am not and that I needed to show other people that they can be their authentic selves. Senior year I decided to stand in my own truth.”

It wasn’t always easy—for instance, when he proposed canceling the school’s blood drive until gay students could donate. His efforts, he said, “began a conversation and helped me realize how important conversation is to help change people’s minds and change people’s hearts.”

The theme of conversation factored into his Harvard application. Coletti didn’t hesitate at an optional essay asking for a hypothetical letter to a future roommate.

He would be there, he wrote, “if they ever wanted to talk about what it’s like to be gay, to have parents who didn’t attend the elite colleges, to grow up in a working-class city, to have a parent who is a drug abuser, to have depression.”

“Harvard cares about conversation,” Coletti remembered thinking as he worked on the essay.

He has kept the dialogue going on campus and beyond. Coletti went to Brazil as a freshman with the David Rockefeller Center for Latin American Studies, helping counsel Brazilian college students who were considering travel and study abroad. The trip sparked a passion for the country and he returned to Sao Paolo the next two summers through a grant from the Weissman International Internship Program. A grant from Harvard’s Weatherhead Center for International Affairs supported the research that would become his senior thesis: how the socioeconomic policy of Brazil’s military regime affected the LGBTQ community in Sao Paolo.

Helping others on Harvard’s campus and beyond is paramount to Coletti. Through PBHA, he has taught U.S. political history and civics to elementary school students in East Boston, and he’s been a Peer Advising Fellow since his sophomore year, helping freshmen ease into college life. Coletti called engaging with incoming students and watching them flourish on campus “more rewarding than getting an A.”

“The fact that I got to be part of their story and that they got to be a part of mine is really what makes Harvard such a special place to me.”

Promoting equality and social justice has been important to Coletti’s Harvard story. When a gay friend was attacked on social media, Coletti wrote an opinion piece for the Harvard Crimson titled “My Identity Isn’t a Sin,” in which he opposed the “love the sinner but hate the sin” argument.

“I refuse to believe that this part of me is a sin,” he said.

While many gay Catholics thanked him, other readers pushed back. The detractors didn’t dissuade Coletti. His editorial “was a jumping off point for conversation.”

And by now, conversation is essential to Coletti. He hopes eventually to go to law school and then continue his fight for rights for the LGBTQ community and “for the issues I believe in.”