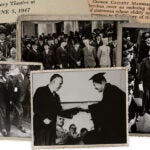 Birth of a peaceful Europe

From the day of her birth in Uganda, Agnes Igoye confronted a world where girls were not valued.

Igoye’s mother, having already given birth to two girls, was expected by relatives and neighbors to produce a boy. Agnes’s arrival on March 8 (coincidentally International Women’s Day) was greeted as a bitter disappointment that bordered on “scandalous,” said Igoye, M.C./M.P.A .’17. “And so, growing up in that atmosphere, when you’re not valued as girls, even education becomes [very difficult]. Many girls don’t get the chance.”

Thankfully, her parents knew the importance of education. Her father had put himself through school selling cassava roots, while her mother, a prodigy living in the bush, was “discovered” by missionary sisters who paid for her education. Both became teachers who bucked convention by insisting that their daughters (six of their eight children) get an education. It was an idea widely ridiculed.

As a child, Igoye was teased relentlessly for her interest in school, even called a prostitute by one man. Not sure what the word meant, but certain it wasn’t a compliment, Igoye said she made a promise then and there to her mother.

“I said, ‘I’m going to really work hard in life and succeed and embarrass this man!’” Igoye, 45, recalled with a laugh. “I didn’t know what success meant, but I just knew that I had to do the things that boys do.”

Igoye’s education came under threat in the late 1980s after religious militant Joseph Kony and his violent guerrilla group, the Lord’s Resistance Army (LRA), embarked on a violent campaign across Uganda and into neighboring countries. Kony and the LRA terrorized villages, including Igoye’s, killing and mutilating residents, burning and looting homes, and abducting children for sexual exploitation and soldiering. One of Igoye’s female cousins was a victim.

With gunfire outside their door, the family fled, leaving all their possessions behind to looters. They made their way to an encampment for some of the millions displaced by Kony’s reign. It was a traumatic chapter in her life that Igoye now says fueled her zeal to protect women and children from exploitation.

“Human trafficking is everywhere,” but it can have different manifestations and even different definitions depending on the country, Igoye said. “In Uganda, for us, human trafficking includes child marriage, it includes the use of children in armed conflict, it includes superstition … it includes removal of organs for witchcraft and rituals,” and it includes forced labor and servitude, street begging by children or karaoke performances and dancing for money.

Despite years of turmoil, Igoye finished high school and won admittance to Uganda’s only university at the time to study social science. She earned a master’s degree at Makerere University, then went to the University of Oxford as a Fulbright/Hubert Humphrey Fellow in 2010-11 to study forced migration. This month, she will graduate from Harvard Kennedy School as a Mason Fellow in the Mid-career Master in Public Administration Program.

After college, Igoye joined Uganda’s ministry of internal affairs as an immigration officer. While working at the border and at the passport office, where fraudulent documents passed regularly, she saw trafficking and transnational organized crime operations up close and wondered why the government didn’t seem to be taking them seriously and — though it wasn’t part of their job description — why immigration officers weren’t being trained to identify these violations and intercede. She persuaded the Minister of Internal Affairs that with proper instruction, officers could help root out traffickers and protect survivors being moved in and out of the country. He appointed Igoye Uganda’s first trafficking trainer and the first woman officer to hold an immigration command post. Since then, she’s taught close to 2,000 new recruits how to identify suspected traffickers and victims, and she helped develop and coordinate Uganda’s anti-trafficking efforts to meet international standards.

“There’s so many things to look out for because it’s not like they grab you and take you — [many victims] go willingly” and don’t realize they’re being trafficked, she said. Victims are taught by traffickers how to respond to law enforcement questions so that they avoid detection. Officers looking for telltale signs are essential.

While abductions do occur, most trafficking today is done by professionals who recruit through social media or enlist help from a potential victim’s family or friends. Too often, parents are tricked into thinking they are helping their children seize a golden opportunity to study abroad or secure a high-paying job in the U.S. or Europe.

“The challenge in Uganda is unemployment; people need to work. [Recruiters] lie to you that they got you this fantastic job, and when you get there, it’s not that job, it’s prostitution” or forced labor, perhaps in the Middle East, she said. Igoye is now the national training manager and deputy national coordinator of Uganda’s anti-trafficking task force.

In June, she returns to Uganda’s capital, Kampala, to open a much-needed support center for survivors of trafficking. Armed with a $50,000 award from fashion designer Diane von Furstenberg’s foundation, Igoye hopes the “Dream Revival Center” will help fill an aching void. Uganda offers few services for those who’ve been trafficked and too often, even if survivors do escape, they find themselves no longer welcome by family and friends or left without money or a place to stay. With no one to trust, victims call in the middle of the night to have Igoye take them to her home. But after two law enforcement colleagues were shot dead recently, Igoye says it’s not safe to take victims in.

She’s careful but fatalistic about her life’s work. “If they want to get you, they get you. But I’ve also settled for the idea that I’d rather die doing something like this than dying in my sleep. It would be boring!” she mused.

Ultimately, Igoye hopes the center will allow survivors to reclaim their lives and pursue justice. “We often don’t win cases in court because traffickers … know where to get the survivors” and “make them withdraw cases,” she said.

Between classes, Igoye speaks to groups across the country, including the United Nations, the State Department, and law enforcement and anti-trafficking professionals. She also raises awareness and promotes advocacy for girls and women to groups of university and high school students. Last summer, she visited a Las Vegas clinic with Nevada’s U.S. senators, met with trafficked women being held at area detention centers, participated in a raid to rescue 100 trafficked children, and went to the U.S.-Mexico border to discuss border management with patrol guards. Recently, she was chosen by the Clinton Global Initiative University to mentor participants working in criminal justice, and she’s working with the BBC on a documentary about trafficking.

Igoye said leaving the front lines to spend a year at Harvard has been both intellectually rewarding and a respite from the horrors she deals with daily.

“It’s not just about what you learn in class, it’s the confidence you get. Because I’m thinking, how did I end up here, there are so many smart people? And they drum it into you: You deserve to be here,” she said. “So, you get all that out of your head and then you just go for whatever you want. That’s the beauty of being accepted in a school like this.”

“Eventually, I should run for office,” Igoye said. “With this education, they can no longer say ‘she’s not qualified,’ so who knows?”