Being ‘smart’ about her education 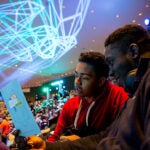 Paving the way to entrepreneurship

Whether it’s about DNA, CO2 emissions, or census blocks, “I love data, I love numbers, I love everything about it,” Rich said. While she worked to earn a bachelor’s degree in biology, then a master’s in forensic science, then another master’s in liberal arts, she thrived on a diet of facts and figures, analysis, and hard data.

And now, inspired by her work in Harvard Extension School’s Sustainability Program, Rich was able to combine her favorite interests in a capstone project that created an action plan to increase Boston’s tree canopy coverage to 35 percent by 2030 by strategically placing long-lived, hardy trees in low-income and minority neighborhoods.

If her plan were implemented, she said, the city could increase its return on investment while reducing greenhouse gas emissions and energy costs in the affected neighborhoods.

Rich attributes her environmental interests to growing up near Lake Erie, in tiny Fredonia, N.Y. After earning her biology degree at Rochester Institute of Technology, she went on to Virginia Commonwealth University, taking a full load while working full time analyzing DNA for Pfizer.

“That was when ‘CSI’ was big and it seemed a very sexy thing to do. It was very enticing for the analytical mind, but it wasn’t as attractive and cool as a lot of people thought, because there wasn’t any of the problem-solving or criminal element involved,” Rich said.

And the schedule had her burning the candle at both ends. “It was chaos,” she said. She began having absence seizures, short periods of blanking out while seemingly still fully conscious. When her doctor diagnosed her with epilepsy, Rich had to learn not only how to control the disease, but also how to integrate that new reality into her academic and professional careers.

“I’m not going to lie, I’ve had to work 120 percent in comparison to other students’ 80, because there are nights when you’re looking at a computer screen and you’re, like, I’m not even sure those are words,” Rich said. “But the 120 percent I worked was 100 percent worth it.”

Her epilepsy means that Rich can no longer drive, so she and her husband, Brodie, must live in a mass transportation hub. When he was offered a job in Boston, she said, “We sold everything we had and picked up and flew by the seat of our pants. Which was awesome.”

“I was very solid in my analytical skills, very solid in program improvement and development, and I wanted to integrate that into continuous improvement,” she said. “I’ve always had a little obsession with the environment and a lot of green concepts, but I wasn’t sure which path I wanted.”

Drawn to urban planning, Rich attended Boston Architectural College’s landscape program for a semester. It was a poor fit.

“It was 75 percent creativity and 25 percent data-driven and that just wasn’t me,” she said. “I missed quantitative analysis and numbers and data and research and technical reporting. I missed all the scientific elements I’d survived on for so long.”

Rich started researching the Extension School. “I knew I didn’t want to go into debt again, so I was going to be very smart about it,” she said. “I started looking into class offerings and who was teaching them, and I was surprised to see that the majority were Harvard-based professors or from Northeastern or Tufts. I was, like, OK, I can get an Ivy League education for a fraction of the cost.”

In spring 2015, Rich started in the sustainability program. With her husband’s support, she was able to attend full time, working through summer weekends and holidays — “On the Fourth of July I could see the flashes of fireworks from my window, but I had an assignment literally due the next day,” she said — and earning her master’s in just 18 months.

One of the first classes she took was “Sustainability Business and Technology,” and she loved it. “They had us design our own invention and then design a business model around it. It really took me out of my comfort zone, but I had so much fun with it,” Rich said. Then in Tom Gloria’s class “Industrial Ecology, Concepts, and Practice,” she started the project that led to her capstone.

“Boston has a tree-planting initiative to increase our canopy coverage, planting 100,000 trees in the city by 2030,” she explained. “I wanted to take it a step further and ask if Boston goes ahead with this plan, how can it get the most bang for its buck? Identifying neighborhoods, looking at types of trees, what could be done to help reduce CO2 emissions, reduce energy costs, save money — could these factors be tweaked to give them maximum benefit?”

With software and a lot of research, Rich created a plan that has been submitted to Austin Blackmon, the city of Boston’s chief of environment, energy, and open space.

Today, with a third degree behind her and a clear field ahead, Rich has a chance to appreciate the space she’s in.

“When I was an undergrad, I was in my little biology bubble, or my previous master’s program, my forensics bubble, and it was minute. But sustainability, we had everybody. It doesn’t matter if you’re science-based or pharma, we had people from government, from industry, even from law enforcement,” she said of the Extension School program. “What I absolutely loved about it was that it got you out of your little echo chamber and it gave you a lot of new perspectives and opinions that you normally wouldn’t get, even in your other programs.”

After she marches in Commencement to receive her A.L.M., Rich will remain connected to Harvard.

“I’ll still reach out to professors with questions even though I’ve already graduated. They’re so willing to always help, regardless,” she said. “But that’s kind of the mindset in the sustainability network: People are willing to help out anyone.

“It’s not a competition. They’re pushing other people up. It’s a support system. If we’re not going to do it for each other, then nobody else is going to.”