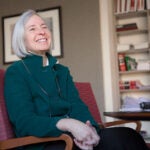 Stepping down and speaking up

Eduard Franz Sekler, an architecture historian and first director of the Carpenter Center for the Visual Arts, died on May 1. He was 96.

The Austria-born Sekler studied in Vienna and, later, London, before joining the faculty at Harvard in 1954 at the invitation of Josep Lluís Sert, who was dean of the Graduate School of Design at the time. In 1962, Sekler became coordinator of studies at the newly built CCVA, becoming its director four years later. In his decade overseeing the Le Corbusier-designed building, he brought to bear a mission that extended far beyond art design.

Said Alfred Guzzetti, Osgood Hooker Professor of Visual Arts: “I saw Eduard as a very European presence. Through Eduard’s recruitment of faculty and staff, he strengthened the European — and even international — character of the enterprise. He saw design at the center, opening out to the broader practices of the contemporary visual arts in the way that modernist European architecture did.”

Courtly, but determined, Sekler co-founded the Department of Visual and Environmental Studies (VES) with the late Albert Szabo, and engaged divisions across the University, bringing professors of science (Arthur Loeb, for example) onto VES faculty.

“He was a person of very high standards. Everything had to be just so. He wasn’t a micromanager, but he was a manager and critical standards had to be upheld. He pushed to establish VES. He was eager to academicize it. He was adamant and eventually got his way. If it weren’t for Eduard, I’m not certain VES would exist as a department,” Guzzetti said.

The author of many publications, and recipient of several awards including a Guggenheim Fellowship, Sekler worked as an advocate for preservation of Kathmandu Valley in Nepal. He made his first trip there in 1962 as part of United Nations Educational, Scientific and Cultural Organization (UNESCO), helping prepare plans to safeguard the area’s historical monuments. In 1990, he founded the Kathmandu Valley Preservation Trust, which has saved more than 50 buildings and monuments.

“I knew that change was coming, but I didn’t know it would come in such a fast and uncontrolled way and destroy that beautiful valley. It was clear to me that something had to be done,” Sekler told the Gazette in 2004.

Sekler is survived by his wife, Mary Patricia.