Forging her path through different worlds 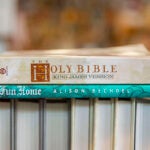 Margaux Fitoussi’s world has changed before her eyes more than once. Born in France, she lived in Paris until she was 7, when her parents — she an American dancer and he a doctor of Tunisian origin — divorced. Next was a home on the edge of the ocean in Long Beach, Calif., where her mother became a teacher, and Margaux lived with her two younger siblings and her Italian-American grandmother.

Though America was her home, France, Tunisia, and Italy were close to her heart. Her ancestry and her relocation were embedded in the ancient and worldwide subject of human migration.

“Having grown up with an immigrant father, then moving to the United States myself, even though my mother is an American, made me interested in migration and historical memory, and the experiences that carry forward,” said Fitoussi, who graduates with a master of theological studies from Harvard Divinity School (HDS).

Those experiences “that carry forward” are deeply rooted in the past. Backed by HDS and Harvard’s Center for Middle Eastern Studies, Fitoussi traveled to her father’s homeland for the first time in 2016 and explored the Hara, the ancient Jewish section of Tunisia’s capital, Tunis, where her family can trace its ties for many centuries. Those travels yielded an exhibition she curated of 19th- and 20th-century photographs of the Hara, and a short documentary film on the migration and memories of the Jewish community who left the Hara over the French colonial period from 1881 to 1956 (when Tunisia gained its independence), never to return. “El Hara,” created with director and filmmaker Mo Scarpelli, is currently making its way through the festival circuit.

“What’s been so wonderful about my time at Harvard has been the opportunity to explore my personal history through an academic lens,” said Fitoussi. “The work wove all these different threads together: history, anthropology, and my understanding of the present moment, and the past, through imagery.”

Fitoussi has also been studying a coastal town near the Libyan border in southern Tunisia. There fishermen, firemen, the coast guard, doctors, and members of the Red Crescent struggle to cope with the bodies of African migrants drowned while attempting to cross the Mediterranean to Europe.

Her study of these first responders explores the ways in which people care for the dead and what it means to have a “good” death, she said. It also explores such charged, complicated questions as: Does the unnamed body, stripped of its identity, persist as a socio-political being?

As an undergrad at the University of California, Berkeley, Fitoussi concentrated in the history of 20th-century decolonization and studied in South Africa for nine months. Not one to be daunted, in 2010 she took part in an open-water swim from Robben Island (the prison island where Nelson Mandela had been held) to the South Africa mainland: an 8K race in the icy South Atlantic where currents are rough and great white sharks lurk. She and her teammates swam 30-minute relays, finishing in under three hours. Fitoussi took another plunge that year, in another inhospitable body of water, swimming the San Francisco Bay from Alcatraz Island to the shore.

“I like being part of teams that work. It’s the chemistry,” said Fitoussi. “The best example of that is the film I just finished. Sometimes it’s much easier to work alone, but when you do work with someone who brings very different skills to the table and works just as hard as you do, it’s invigorating. Collaboration at its finest.”

After college, she collaborated with residents in the Democratic Republic of the Congo and the Central African Republic to help radio tower operators who lacked cell service improve their reporting and documentation of human rights abuses by the Lord’s Resistance Army in 2011-13. She also contributed there to a movie based on interviews with young soldiers returned from fighting for the LRA.

“It was a real introduction into what trauma looks like,” Fitoussi recalled.

But despite her commitment, her enthusiasm for humanitarian work was fading. “I became disillusioned. Money was being spent inefficiently on projects that were never completed, and much of the work didn’t seem to be responding to actual needs.”

After seeing how turmoil in the Central African Republic was characterized as a sectarian conflict between majority Christians and minority Muslims, she wished that she better understood representations of religion in the media. This, combined with her desire to learn Arabic and focus on North Africa, “all coalesced into Divinity School.

“I didn’t realize how thirsty I was for this type of conversation, the critical thinking and debates that I found so striking here,” Fitoussi said, pausing to note her family’s surprise at her decision.

In addition to her Divinity School coursework, Fitoussi has studied Arabic, anthropology, and history with a North African focus — cross-registrations that allowed her to “play in the best way possible academically.”

Fitoussi is going on to a Ph.D. program at Columbia University, where she hopes to study “the shift in politics and political consciousness as reflected in visual culture in post-revolutionary Tunisia,” and to continue working on films.