Seminal speeches through the years 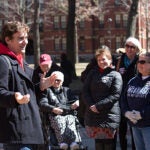 Speaking the language of sympathy

A 360° video re-creates the impact of listening amid a Harvard audience to Churchill, Kennedy, Rowling, others

While it’s common for a modern-day speech to become instantly familiar to millions of viewers through television or the internet, few people experienced the direct impact of British Prime Minister Winston Churchill’s address at Harvard in September 1943.

Through the years, an impressive range of orators have used the opportunity of delivering speeches at Harvard to reach not only those in attendance but the nation and sometimes the world, offering messages of profound significance for their times.

In the 360° video above, we imagine what it might have been like to sit among those as they took in five seminal speeches across seven decades, including those of Churchill, John F. Kennedy, Mother Teresa, Bill Gates, and J.K. Rowling.

This is a 360° video. If viewing on an iOS device, open the YouTube app. Otherwise, click and drag your mouse, or move your mobile device around, to explore the 360° environment. For the most immersive experience, try using a headset, such as Google Cardboard.