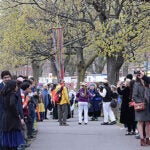 Lowell House on May Day

With scholarly interests ranging from the evolution of mollusks to particle physics to the culture of ghettos, the five faculty members named Harvard College Professors this month may not appear to have much in common. But one trait they all share is a talent for making their respective subjects come alive in the classroom.

“Our extraordinary faculty offer Harvard students an unparalleled environment for learning across the arts and sciences,” said Smith. “Their dedication, passion, and intellectual energy are qualities that I cherish. I am pleased to honor these outstanding individuals in the FAS for the inspiring impact they’ve made in our students’ lives.”

The Harvard College Professorships began in 1997 through a gift from John and Frances Loeb. They are five-year appointments providing faculty with extra support for research or scholarly activities, a semester of paid leave, or summer salary. The professorships are one of several efforts dedicated to highlighting exceptional teaching at Harvard.

Professor of English Amanda Claybaugh specializes in the literature of the U.S. Civil War and Reconstruction, trans-Atlantic literary relations, and contemporary American and British literature. But questions about novels are not the only ones she fields from her students.

“This new generation asks why the humanities matter and what their College education should mean,” noted Claybaugh. “I’ve always loved teaching, but it’s become particularly challenging — and, for that reason, particularly rewarding — in recent years.”

Claybaugh has responded to this challenge by entering into new collaborations with different departments around Harvard, such as working with the faculty who created Humanities 10 (a new gateway course into the humanities) and helping establish an ethnic studies track in History & Literature.

“Our students’ questions galvanize us to come up with new answers,” she said.

Melissa Franklin is a particle physicist whose experiments aren’t limited to the lab: In the classroom, she is constantly testing various approaches to teaching.

“This year, I taught three courses in three different styles,” Franklin explained. “In ‘Introduction to Electromagnetism,’ I did not lecture for more than five minutes at a time to give my students more time for hands-on activities. For my freshman seminar on quantum mechanics, I taught solely through physical demonstrations and readings. Different still was a Graduate School of Design course on digital media, where we spent many afternoons in the maker space creating installations.”

The through-line connecting all of these approaches is Franklin’s emphasis on learning by doing. For example, she taught students how to make their own data acquisition systems because, as she put it, “It’s important that they learn the process of taking data, as well as how to make sense of it. And this is something they can take with them after they graduate.”

Tommie Shelby is known for his insightful scholarship in a range of topics within Africana philosophy, from the foundations of black solidarity to hip-hop to the cultural patterns of ghettos. Yet he’s equally perceptive about confronting the hurdles that come up in teaching his subject.

“Philosophy can be otherworldly and esoteric,” he said. “But I keep it close to earth by engaging students with questions and arguments that bear directly on things they most care about while pushing them to think more deeply, critically, and carefully.”

In particular, Shelby believes that understanding how philosophy has potential for meaningful interdisciplinary applications is key.

“I try to enhance students’ appreciation for how philosophy, sometimes in conjunction with research in other fields, can help solve pressing and controversial social problems, particularly around issues of race and class.”

In his lab, Gonzalo Giribet investigates the evolution and biogeography of invertebrate animals, particularly arthropods and mollusks.

In his classroom, Giribet defines himself as “somewhat strict” and committed to providing a rigorous learning experience. But he’s equally committed to making sure his students know he’s invested in their success.

“If a student falls asleep in my class, I consider how should I make the class more engaging,” he said. “If students don’t do well, I try to understand what went wrong on my side.”

According to his students, who describe him as both “fun” and “brilliant,” Giribet succeeds in inspiring loyalty and passion. “Believe it or not, I have had more students apologizing for not having done well in their exam than students complaining about their grade,” he said.

When Lončar began teaching Introduction to Electrical Engineering five years ago, 19 students were enrolled. The course has since exploded in popularity, growing to 220 students representing a variety of concentrations.

What was behind the transformation?

“Over the years, I made the course more hands-on,” Lončar explained. “We replaced final exams with projects. We also incorporated more robotics into the labs. It’s so rewarding to watch students design and program robotic systems in a final project who knew nothing about them at the beginning of the semester.”

“Early in my career, I took sort of a fire-hose approach to education: I thought it was my responsibility to communicate everything I knew,” he said. “But I’ve since taken a more modular approach to make the material more accessible. It’s more focused on how things work without hiding behind lots of math.”