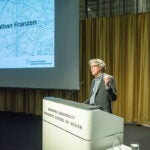 Daniel Ziblatt, a Harvard professor of government, recently visited the Minda de Gunzburg for Center for European Studies to discuss his new book, “Conservative Parties and the Birth of Democracy.” During a Q&A session earlier, he discussed the issues of governance and stability that he examines in it.

GAZETTE: Why did you decide to write a book on the history of democracy?

ZIBLATT: When I began working on this book, I was struck by a deep historical question that also resonates with our times. If you looked back at Europe in the middle of the 19th century, many of the factors that we today know make creating and sustaining democracy such a truly difficult process — economic inequality, stratification, repressive states — were actually present there as well. Nearly all countries, from Britain to Germany to Southern Europe, were highly stratified societies governed by deeply hierarchical and repressive states, all ruled by restricted suffrage. So I found the paradox gripping of how these unlikely countries ultimately became models of stable democracy by the mid-20th century. I was motivated to understand the sources of this transformation and to offer a new way to think about democracy’s future. All of this, I should add, has become even more pressing, as all of us look around us and worry about the unsettled state of democracy today.

GAZETTE: And what is different about your approach?

ZIBLATT: I focus on a different problem than has traditionally been the subject of study when people study democratization. I discovered a largely untold and fascinating story of how Europe’s pre-democratic insiders, conservative political parties representing old-regime elites, remade themselves and shaped how democracy emerged. This is a different way of thinking about the problem. Historians, sociologists, and political scientists, with good reason, have tended to focus on the important and often liberating role of working-class movements and liberal middle-class groups pushing for democratization. As important as these groups are, I depart from these approaches in a significant way. I studied the papers of leading conservative statesmen in Germany, Britain, and other countries, as well as lesser-known operatives of conservative parties and groups across Europe because I wanted to know how the opponents of democracy coped with and shaped its rise.

GAZETTE: What did you find in your research?

ZIBLATT: I found something very surprising. In the world of party conservatism in 19th century Europe, a subtle but momentous rupture occurred in some countries but not in others. Conservatives, representing the old regime, aristocrats, and other elite groups opposed to democracy in principle, suddenly realized the power of political parties and discovered the importance of pragmatic political action. Political parties were an invention that transformed the world. One observer at the time compared the discovery of the power of parties to the Spartan discovery of the power of infantry in warfare. When conservatives, in a range of countries including Britain, Belgium, and in Scandinavia, realized the power of political parties and built them up, democracy itself ultimately became safer for them and more enduring. In countries, where this conservative innovation didn’t happen (Germany and much of southern Europe), democracy was much more unhinged and fragile.

GAZETTE: Why do you think conservative parties are so important to the history of democracy?

ZIBLATT: This is where things get really interesting. The biggest barrier to creating sustainable democracy in the past, and today as well, is the fear of autocratic elites to democracy; they feel their wealth, status, and power is threatened by democracy. One figure I studied closely was Lord Salisbury, a longtime 19th-century Conservative Party prime minister in Britain, a member of the wealthy, landed elite, and a powerful man. I studied his papers held in a basement archive in his family’s huge home outside of London. I was amazed to see in the 1860s how fearful he was of democracy. He thought suffrage reform to expand voting rights to the working class would ruin him and his peers. By the 1880s, the reactionary Lord Salisbury had experienced a subtle conversion. He still was in principle no big fan of democracy but he was working closely now with party operatives for the Conservative Party, kind of proto-political scientists who studied demographic data, who could try to win elections for Salisbury’s party. Also, his party built up a mass mobilizing organization. The machinery of party organization converted a dogmatic opponent into a reluctant democrat.

GAZETTE: But conservatives presumably have not always come to democracy so easily?

ZIBLATT: Yes, that is correct, and this is the big contrast in European history. There was a whole group of countries where this rupture did not happen. One example I studied closely involved the repeated efforts of German conservatives to build political party structures. In the late 1890s, these efforts simply had failed. The right was fractured. The right-wing grassroots movement was controlled by interest groups and not political parties. Without political parties available for the right, the organizational firewalls that come with political parties were absent, and much more dangerous radical right forces began to assert themselves into politics. In my book I have two chapters describing the rise and fall of Weimar Germany, analyzing the history of this tragic moment in European history, showing that it was in part the fragility of the German Tory tradition that opened the door for radical right forces and ultimately the rise of Adolf Hitler’s Nazi Party. In an ironic way, the fractured nature of German conservatism was the Achilles’ heel of Weimar Germany’s experiment with democracy

GAZETTE: It sounds like your argument has some specific implications for the state of democracy today.

ZIBLATT: Indeed, this is correct. While my book is entirely historical, readers have told me that it is a parable for today’s crises of democracy. When one compares German and British conservatism in the past and thinks about how these societies developed, one gradually comes away with the conclusion that democracy may in fact require a robust conservatism that has already made its peace with democracy. Whatever one’s ideological orientation, a precondition of democratic stability may be a strong, constitutionally minded electoral right. The absence of a strong constitutional conservative party may not mean simply an enduring liberal or social democratic triumph into the future. Without a strong constitutional right, the door is opened for much more dangerous right-wing forces, which may not even accept the basic norms of democracy. Also, without a robust conservative party of the right, reactionary forces historically have looked to gain power through extra-constitutional means — military coups and counterrevolutions. All societal groups deserve the right to legitimate participation in politics. Without it, the result is a fragile democracy.

GAZETTE: Are you worried about the state of democracy in the world today?

ZIBLATT: Yes, very much. The presence of a form of right-wing populism in Europe and United States that barely accepts the basic norms of democracy is worrying. What to do about it is the question. Many have talked about the role of globalization in triggering this. I tend to think we should also think about the responsibilities of existing political parties in distancing themselves from these forces, not being tempted to collaborate. How mainstream parties can do this while maintaining electoral support is the trick, but it is what political parties should be expert at. In any case, the tragic lessons of European history make clear that there are moments when basic norms of democracy are violated within a democracy, and responsible statesmen, not only on the left, but also on the right. must have the political courage to confront this challenge, and not abdicate their responsibilities. European history is filled of cases where this lesson was not yet learned, with tragic consequences.