Bringing big data to the farm 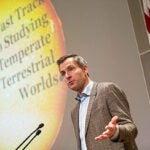 The next great agricultural revolution is likely to come from information, not new plant breeds or genetic tinkering, as digital technology and big data help farmers make better decisions and drive up crop yields, according to the head of a “digital agriculture” company.

Michael Stern, president and chief executive officer of Climate Corp., told a Harvard audience on Monday that the ability to gather detailed information about farmers’ fields, coupled with advances in weather forecasting, computing power, and artificial intelligence, will change farming from a business that often reacts to the past — applying fungicide this year because of an outbreak last year, for example — to one that uses real-time data and weather forecasts to make more accurate decisions for the season to come.

Introducing Stern, Professor of Earth and Planetary Sciences Peter Huybers, co-director of the Harvard University Center for the Environment (HUCE), noted that the first great agricultural revolution happened 10,000 years ago, when humans settled on farms. The second, he said, was the “green revolution” from the 1930s to the 1960s, in which high-yield crops were developed and advances in fertilization, mechanization, and irrigation dramatically increased global food production. The third, Huybers said, may very well be one of information.

Such a revolution will be needed badly in the decades to come, said Stern, who spoke at the Geological Museum as part of HUCE’s Future of Food lecture series. Global population is expected to rise rapidly, while the ability to bring new land into production — which in the past has been a significant way to increase food production — will be constrained by environmental concerns. Projections show about a third less land in production by 2050, he said.

“We’re going to have to figure out how to grow a lot more food on a lot less land and do it sustainably,” Stern said.

This all has to happen as global climate change affects weather patterns, which in turn will affect things such as water availability, plant diseases, and the ranges of agricultural pests.

“It’s going to require us to think differently about agriculture and … how can we develop brand-new tools going into the future,” Stern said. “This is something we need to do over the next five, 10, 15 years as we see the challenges we’re going to be facing in order to feed a planet that’s going to be much more populated, probably a lot drier, and certainly a lot hungrier.”

Luckily, the potential to increase yields is enormous, Stern said. A recent contest sponsored by agricultural giant Monsanto, which bought Climate Corp. in 2013, produced 521 bushels of corn per acre on 10 intensively managed acres, he said. That compares with a national average of just 175 bushels per acre, representing an opportunity to improve yields without bringing new land under the plow.

“We know the genetics of the plant, the physiology of this corn plant, is perfectly capable of producing 500 bushels per acre, if it’s managed correctly,” Stern said. “This is the opportunity of digital ag.”

Stern cited a study by the University of Illinois that broke down key factors driving crop growth. Weather is the most significant, according to the research, followed by fertilizer, type of plant hybrid, what was previously grown in the soil, plant population, how the field is tilled, and use of plant-growth regulators.

Over the course of a growing season, Stern said, farmers make 40 to 50 key decisions that affect crop performance. Recent trends that have swept other areas of society — such as cheap data storage, the ability to transfer data wirelessly, and dramatic increases in computing power — have the potential to also transform the farm, he said.

Stern offered the example of a farmer preparing for the regular fall fertilizing of his fields who delays the application after being alerted to a coming storm. That decision reduces runoff and keeps fertilizer on the field. This helps control the farmer’s costs and also reduces the amount of fertilizer reaching nearby waterways. As data accumulates season after season, computer models will help farmers better manage fertilizer and other additions to optimize yields and minimize runoff.

Remote sensing is another way that modern technology can help farmers know what’s going on in their fields, Stern said. Many farmers drive around to monitor growth and watch for pests and diseases. But these surveys are typically random and don’t cover more than 2 percent of a field. Remote sensing can provide accurate data that covers an entire field and enables recommendations tailored to what’s going on in the afflicted portion.

“The technology that permeates society today is just beginning to hit farm country,” Stern said. “This is going to be the tool that helps us unlock that yield gap.”