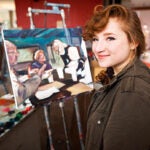 By HKS and HLS Communications

Samantha Power, who served as the 28th U.S. Ambassador to the United Nations from 2013 until 2017, has been named to a joint faculty appointment at Harvard Law School (HLS) and Harvard Kennedy School (HKS), the deans of the two Schools announced Thursday. The appointment begins immediately.

Power will serve as the Anna Lindh Professor of the Practice of Global Leadership and Public Policy at the Kennedy School, where she was the founding executive director of the Carr Center for Human Rights Policy in 1998. She will serve as professor of practice at the Law School, where she earned her J.D. in 1999. For the 2017-18 academic year, Power will be a fellow at the Radcliffe Institute for Advanced Study.

“I am very excited to return to Harvard, as I believe it is essential that we do all we can to ensure that graduates have the skills they need to succeed in messy geopolitical and multilateral environments,” said Power. “Given the daunting challenges we confront — whether from terrorism, rising nationalism, climate change, or mass atrocities — it is essential that we in academia draw lessons from experience, devise practical approaches, and prepare the next generation to improve their communities, their countries, and the world.”

Power became ambassador to the United Nations after serving for four years as President Barack Obama’s special assistant for multilateral affairs and human rights on the National Security Council. At the U.N., Power negotiated the toughest sanctions in a generation against North Korea, became the public face of U.S. opposition to Russian actions in Ukraine and Syria, lobbied to help secure the release of political prisoners around the world, and spearheaded U.N. reforms, including in peacekeeping.

“From her work at the highest levels of diplomacy and human rights to her accomplishments as a prize-winning author, riveting speaker, and inspiring teacher, Samantha Power is a quadruple threat!” said Dean Martha Minow of the Law School. “As she joins the faculty of her alma mater and the faculty of the Kennedy School, her experiences, perceptions, and commitments will offer invaluable illumination of laws, policies, politics, ideals, and realities essential to the pursuit of justice, human rights, and international relations.”

“Samantha Power’s record of public service speaks volumes about her knowledge of and commitment to diplomacy, human rights, international justice, and the rule of law,” said Dean Douglas Elmendorf of the Kennedy School. “We welcome her back to the Kennedy School, where she will contribute significantly to our research, teaching, and practice on those crucial issues.”

In 1998, Power joined the Kennedy School’s Belfer Center for Science and International Affairs as project director of the Human Rights Initiative, which became the Carr Center. Prior to her academic career, she worked as a foreign correspondent, contributing to The New Yorker, The New Republic, and The New York Review of Books.

Power won a Pulitzer Prize in 2003 for “‘A Problem from Hell’: America and the Age of Genocide.” She is also the author of the New York Times best-seller “Sergio: One Man’s Fight to Save the World” (2007), and the editor, with Derek Chollet, of “The Unquiet American: Richard Holbrooke in the World” (2012). In 2004 and 2015 Time magazine named her one of the 100 most influential people in the world.

At the Kennedy School, Power will be affiliated with both the Carr Center and the Belfer Center, where she will serve as senior member, board member, and director of the new International Peace and Security Project.

An Irish immigrant, Power came to the United States at age 9. She earned her B.A. from Yale University before going to Harvard Law.