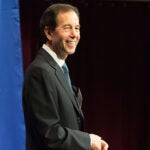 Getting the word out on learning from experience — and failure

At 17, Laila Ali flipped on a Mike Tyson fight and was hooked, not by the heavyweight champion, but by the two women who entered the ring to box before the main event. Following in the footsteps of her legendary father, Muhammad Ali, Laila Ali became a world champion boxer and in the process helped redefine a sport traditionally dominated by men. Now a fitness and wellness expert with a lifestyle blog and podcast, she continues to push for equality for women in sports.

Ali, set to deliver the keynote address at the Radcliffe Institute for Advanced Study’s conference “Game Changers: Sports, Gender, and Society” on April 7, spoke with the Gazette about boxing, being a role model, and not backing down from her famous father.

ALI: I was at a friend’s house and we turned on the TV to watch a Mike Tyson fight, like many people did back then. I wasn’t this big boxing fan but I watched the big fights. So when these two women come into the ring — Christy Martin and Deirdre Gogarty — I was surprised, excited, had no idea that women even fought, and these two women slugged it out. It was a bloody fight and I was like, “I want to do that.”

I remember my friend’s dad saying at the time “Laila you can’t do that, those women will take your head off.” And I thought, “No, I could do it.” The seed was planted, but I think it took me about eight months to actually start training and it kind of just took off from there.

GAZETTE: Do you think your instant attraction to the sport was influenced by your father’s career?

ALI: Obviously I knew my father was a boxer and he was one of the greatest, but I never wanted to do it because of him. I never even thought about being a fighter until I saw women’s boxing on television.

GAZETTE: How did your father react to your decision to become a boxer?

ALI: He was definitely concerned. He would have rather me not. But he soon found out that not fighting wasn’t an option for me. He said: “What are you going to do if you get knocked down, or if you get knocked out? The whole world will be watching. Won’t you be embarrassed?” That’s my dad, that’s the type of teacher he is; he brings up every negative thing that could possibly happen, gets you to try to imagine that, and then he says, “Do you still want to do it?” My answer to him was basically, “You got knocked down, you got back up. Hey, that’s what I am going to do if it happens.”

He didn’t believe that women should fight. My dad was kind of a male chauvinist, one of those guys who thought, “Women shouldn’t do this and women shouldn’t do that.” And I would say that over the course of my career I changed his view on that. He started respecting women’s boxing as a sport. So that was a big win for me.

GAZETTE: What was it like to know you changed your dad’s mind?

ALI: I was glad that he was honest with me and with himself and was able to say: “I was wrong.” I think that’s important for anybody.

GAZETTE: How do you think the sports landscape has changed for women?

ALI: In my work with the Women’s Sports Foundation, Billie Jean King’s organization that she started so many years ago, I’ve realized there’s still a lot of inequality as far as the participation. The amount of money in collegiate sports set aside for men and women is so different. We need to have more equality there; the same with female coaches. They are getting paid a whole lot less money than the male coaches. And the pay gap between men and women’s professional sports needs to narrow. Girls aren’t encouraged to participate in sports when they feel like they are not going to be able to make money.

I’ve seen, over the years, women in every single sport now, every single sport we play, down to football. That really changes these young kids’ minds and opens their minds up to think, “Wow, women are strong, women can play just as well as men can play.” I think we are moving in the right direction. Still, a whole lot needs to be done.

GAZETTE: What does it feel like to be a role model for the next generation of young female athletes?

ALI: I think it’s important. I don’t wake up thinking about it. What I do is I focus on the decisions that I have to make on a daily basis that have to do with business, that have to do with my public persona. And I always take that into consideration. There are things that I will not do just because of how it will come off. I am really into fitness, health, and wellness. You are not going to see me in McDonald’s commercials.

I just think it’s important for me being a public person to always watch what I say, how I act, how I dress, all those things, because young girls are watching. And you want them to see someone they can aspire to be like. That has her clothes on. That they can still stay, she’s pretty, she’s attractive, but she’s also smart, she’s strong, and she’s successful and confident. And it’s OK to be confident, it’s OK to be ambitious, it’s OK to feel like the sky is the limit. I try to be that person, to lead by example.

GAZETTE: What do you think your father, who died last June, would say about you today?

I am different from my dad. I told him at a very young age that I didn’t want to be Muslim, which caused some rifts between us. I was his youngest daughter and I knew enough at a young age that I didn’t want to follow his religion. This is a man who put everything on the line for his religion and now you’ve got your youngest telling you “no.” I had the courage to stand up to Muhammad Ali as a kid [laughs]. So he knew there was something different about me. He knew from then on, “OK, I’ve got my work cut out with this one.”