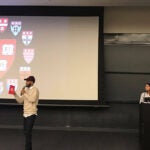 Danoff Dean of Harvard College Rakesh Khurana announced today the appointment of new faculty deans for Dunster and Mather Houses. Sean Kelly and Cheryl Chen will shepherd Dunster, while and L. “Maha” and Amala Mahadevan will do the same at Mather. They will take up their posts this fall.

“Harvard’s House system is one of the unique features of our undergraduate experience,” Khurana said. “Ensuring its excellence and vitality in the 21st century is critical to our educational mission. I am delighted that these four thoughtful and talented members of our Harvard community will be serving as faculty deans. They are devoted teachers, scholars, and community members, and are committed to ensuring that each Harvard House feels like a home where students can bring together their academic, social, and personal passions and pursuits.”

Sean Kelly is the Teresa G. and Ferdinand F. Martignetti Professor of Philosophy at Harvard University. Kelly earned an Sc.B. in mathematics and computer science and an M.S. in cognitive and linguistic sciences from Brown University in 1989. He received his Ph.D. in philosophy from the University of California, Berkeley, in 1998. Before coming to Harvard in 2006, he taught in philosophy and the humanities at Stanford University and in philosophy and neuroscience at Princeton University. His work focuses on various aspects of the philosophical, phenomenological, and cognitive neuroscientific nature of human experience. Kelly has a special interest in the student-athlete experience, having been a varsity swimmer at Brown.

Cheryl Chen is a senior lecturer on philosophy at Harvard University. Chen received her B.A. from Amherst College in 1994 and her Ph.D. in philosophy from the University of California, Berkeley, in 2002. She was an assistant professor at Bryn Mawr College before coming to Harvard in 2006. Her areas of interest include the philosophy of mind, epistemology, metaphysics, and the philosophy of religion. Since 2014, she has served as associate head tutor for the Philosophy Department, where she is responsible for advising the department’s 80 concentrators. Chen enjoys running in her spare time, most recently with the philosophy department’s team, The Runaway Trolleys.

They have two children, Ben, 12, and Nathaniel, 7. Ben is an avid soccer and cello player. Nathaniel also plays the cello, and loves reading, drawing, and Legos.

“Our whole family is thrilled to become a part of the Dunster House community,” said Sean Kelly and Cheryl Chen in a statement. “The students, tutors, and staff we have met so far have been incredibly warm and welcoming, and we can’t wait to meet all the Dunsterites in the fall.”

Mahadevan is the Lola England de Valpine Professor of Applied Mathematics, of Organismic and Evolutionary Biology, and of Physics at Harvard University, where he has been since 2003. He also is the area dean for applied mathematics in the Harvard John A. Paulson School of Engineering and Applied Sciences.  He received his Ph.D. at Stanford University in 1995 and began his career as an assistant professor at Massachusetts Institute of Technology (MIT), after which he was the Schlumberger Professor in the Department of Applied Mathematics and Theoretical Physics at Cambridge University, and a fellow of Trinity College. Mahadevan’s work seeks to understand the shape and flow of physical and biological matter in space and time, from the mechanics of graphene to the dynamics of tectonic plates, from the morphogenesis of  a cell to the cognition of geometry. He is a fellow of the Royal Society of London. At Harvard, Mahadevan has taught more than 15 different courses in mathematics, physics, biology, and engineering at the undergraduate and graduate level, and advised more than 50 Ph.D. students and postdoctoral fellows.

Amala Mahadevan is an oceanographer, a senior scientist at the Woods Hole Oceanographic Institution, and a faculty member in the Joint Program in Oceanography between MIT and Woods Hole. She received her Ph.D. in environmental fluid mechanics from Stanford University in 1995 and consequently worked at the University of Chicago, Cambridge University, and Boston University, before moving to Woods Hole in 2011. Her research addresses the dynamics of the ocean and the implications for climate. She participates in research cruises to gather data, uses computational modeling to unravel the interaction of physical and biological processes in the oceans, and enjoys working with her students and postdocs. She is a recipient of a 2014-15 fellowship at the Radcliffe Institute for Advanced Study.  She is particularly interested in increasing awareness about the role of the ocean in the Earth’s changing climate and is writing a book on the subject. Outside science, Amala trained professionally as an Indian classical dancer for more than 20 years. This has led to an abiding interest in promoting music and the arts, with a recent stint as chair of a South Asian performing arts organization at MIT.

The Mahadevans have two children, both of whom attend Harvard College, and a dog who answers to a cat’s name, Cheetah.  They enjoy good food, stimulating conversations, classical music, and the outdoors, and are committed to sustainable living and conserving the environment.

“We feel honored to be the next faculty deans of Mather,” the Mahadevans said in a statement. “We look forward to working with and learning from the remarkable students, tutors and staff, and collectively nurture the rich intellectual, social, and cultural communities that have thrived under the leadership of Faculty Deans Christie McDonald and Michael Rosengarten.”

Dean of Freshmen Tom Dingman, who assisted in the search, said, “Everyone on the in-House advisory committees who met Sean and Cheryl and Maha and Amala were impressed by their warmth, depth of experience, high energy, and commitment to supporting students.”

“We are thrilled with the selection of Sean Kelly and Cheryl Chen as the next faculty deans at Dunster House and are confident that the vibrant Dunster community will welcome them with open arms,” said current Dunster Faculty Deans Roger and Ann Porter in a statement. “They will find, as we did, that Dunster has a solid tradition of excellence in all it does and that its diverse students and tutors benefit enormously from a culture that values the many interests, talents, perspectives, and backgrounds that make it a truly exciting place to call home.”

“Mather has been our home for seven years, and we have enjoyed the wonderful richness of the community,” said McDonald and Rosengarten in a statement. “We stand on the shoulders of past faculty deans going, back to the creation of Mather in the 1970s, and we are delighted to pass on the baton to Maha and Amala, who are superbly qualified to lead Mather into the future.”