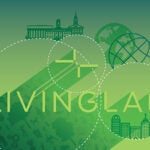 In interview, arts medalist recalls life on stage, screen, and at Harvard

He played a transgender woman in “The World According to Garp,” a minister in “Footloose,” a serial killer in “Dexter,” an alien in “Third Rock From the Sun.” Most recently, he starred as Winston Churchill in “The Crown.”

In a taped interview, Lithgow sat down with the Gazette to talk about how he got his start in acting, his formative years in theater on campus, and his deep affection for Harvard.

Lithgow will receive the 2017 Harvard Arts Medal on Thursday in a ceremony that kicks off the 25th anniversary of Arts First, the annual spring festival of free performances that he founded. Harvard President Drew Faust will present the award at 4 p.m. at Loeb Drama Center. (Admission is free, but tickets are required, either from the Harvard Box Office at 10 Holyoke St., by calling 617-496-2222, or by visiting www.boxoffice.harvard.edu. Phone and online orders have service fees.)