The language of learning 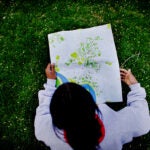 Area teens and Harvard ready to get to work

Eni Dervishi ’17 has always been intrigued by language. “When I was in kindergarten, a teacher taught us how to say ‘chair’ and ‘table’ in English,” she recalled. “I found it fascinating that you could use two different words for [one] object.”

In her small Albanian town, language instruction was limited. But Eni was determined to learn. She heard that a neighbor knew more English than a few simple words. “I’d go knocking on his door, asking him to teach me. … [Eventually] his wife took pity on me,” Dervishi said. When an older friend began studying Italian, Dervishi tagged along, and soon she added French, traveling to the capital Tirana for books. German, Spanish, and a little Portuguese — picked up watching television soap operas — followed. And, finally, her relative isolation turned to a benefit. Because her hometown, Pogradec, is on Lake Ohrid, a tourist attraction, she was able to practice her languages with international visitors.

A window opened for Dervishi. “I fell in love with languages,” she said. “Through languages I was able to see a different world. It opened my imagination to what was out there.”

Indeed, it was a particular phrase that set the economics major on the path to Harvard. “When I was in fourth grade, a teacher mentioned that Harvard was the best university in the world,” she said. “It stuck in my mind, this dream college.”

At that point, college itself was a dream. Her father had no formal college education, but her mother had returned to school as an adult, attending college part time during Dervishi’s youth. “Seeing her balance working two jobs at the time with intense studying, and on top of that taking care of her family, was extremely motivating,” said Dervishi. “My mother not only talked about the importance of education, but she actually showed it with her actions.”

Even with such inspiration, the way forward was difficult. Dervishi’s small-town high school had no one to guide her in the application process. “My teachers hadn’t written letters of recommendation before,” she said. “I had to teach them.” When she needed to send official documents, such as transcripts, she found another hurdle. “I thought of faxing them, but there was no fax machine in my hometown.”

Her persistence paid off with a full scholarship (she was accepted at 14 of the 15 colleges she applied to). But the challenges continued. “The transition from high school to college, which is already daunting, for me was coupled with moving to an entirely new country,” she said. Vending machines, for example, were new to her, as was swiping an ID card to gain entrance to a library. And even with her impressive language skills, some words eluded Dervishi. In a mathematics class freshman year, she said, “I knew how to write an equation and solve it, but I did not know how to say the ‘minus’ or ‘plus’ sign, which made speaking up in class and asking questions particularly challenging.”

“It was like a learning process,” she said, in her lightly accented, fluent English. “I was discovering something new every day.”

Her education has already taken her far from Albania and Cambridge. She has been granted several internships, including with the Ministry of Urban Development and Tourism of Albania (funded by the Center for European Studies) and with the Europe Research Center in Paris (established by the Harvard Business School). Last year, at the European Parliament in Brussels, she interned with the Alliance for Liberal Democracy in Europe Party, in a program funded by the Minda de Gunzburg Center for European Studies. With energy to spare, Dervishi has managed to play intramural volleyball and enjoy her runs along the Charles.

Being at Harvard, she said, “has really been a life-changing experience. I have always dreamt of traveling the world, and Harvard enabled me to do that. I’ve been exposed to so many different viewpoints. I’ve met people from very, very different backgrounds and been able to learn from the best professors in the world.”

Right from the start, she focused on giving back to her wider world. Freshman year, for example, she got involved in tutoring candidates for citizenship through the Institute of Politics. “That was very empowering for me,” Dervishi said, “seeing people who have always dreamt of becoming U.S. citizens, even if it was simply helping them feel more confident about their English skills.”

After graduation, Dervishi will stay in the United States — at least for now. She has landed a consulting job in Boston, which she hopes will help her develop her quantitative skills. She wants to continue her studies, probably at business school, where she intends to pursue a master’s in international development.

“I have experienced the challenges of coming from a developing country, and being here I have seen that Albania is not the only country facing these challenges,” she said. “I want to make my own contribution to solving these issues.”

That includes reaching out to students, particularly those to whom a college education may seem impossible. “Never give up on your dreams,” Dervishi said — in the language that has brought her so far — “never let your circumstances define who you are.”