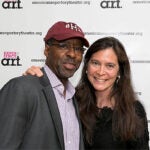 From Harvard to stardom and back

Former vice president, longtime senator to address seniors on May 24

Joe Biden, the 47th vice president of the United States and a six-term U.S. senator, will deliver the annual Class Day address to the graduating Class of 2017 at Harvard University on May 24.

“I am honored to be invited to be a part of this special day at Harvard,” said Biden. “Today’s generation of students is the most engaged, the most tolerant, and the best educated in the history of the United States of America. I am grateful for the opportunity to speak to this year’s graduating class about the great power they hold to shape our nation’s future.”

Biden entered public service shortly after graduating law school in 1968. In 1972 he was elected to his first term in the U.S. Senate, where he represented the state of Delaware until January 2009, when he became vice president. Since leaving that office earlier this year, Biden has continued his longtime commitment to public service by establishing a foundation along with his wife, Jill Biden, that provides educational programming and policy analysis on a variety of topics central to their decades of public life.

“It is an absolute honor to welcome Vice President Biden to Cambridge for Class Day,” said Avni Nahar ’17, co-chair of the speaker selection committee. “His decades-long career in public service is incredibly inspirational for all of us as we consider the impact we want to make in our communities as citizens and citizen-leaders post-graduation.”

“The senior class is incredibly fortunate and excited to hear from such a distinguished speaker on Class Day. We have watched him serve our nation with diplomacy, humility, and humor throughout our time in high school and at Harvard,” said Victoria Jones ’17, co-chair with Nahar.

Harvard College seniors have invited a guest speaker for Class Day since 1968. Prior to that, the honor was given to University affiliates, such as deans, faculty, or classmates. The first invited guest was Martin Luther King Jr., who accepted the invitation shortly before his assassination. His widow, Coretta Scott King, delivered the speech in his absence and also became the first woman to give a Class Day address at Harvard. Since that time, speakers have spanned fields including politics, social activism, journalism, film, comedy, and more.

“While Commencement is officially the last time we gather as an entire class, I think the penultimate assembly on Class Day holds a special place in the hearts of graduating seniors. It’s a day for us to celebrate one another — the people we’ve spent these last four years with,” said First Marshal Riya Patel ’17. “It’s a wonderful opportunity to not just look toward our future, but to reflect on the memories we’ve created together.”

In addition to Biden’s address, Class Day includes award presentations and student orations. All of the events will take place in Tercentenary Theatre in Harvard Yard beginning at 2 p.m. and will be streamed live online.