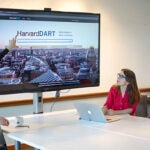 Over the course of the Afternoon of Engagement on April 5, participants shared more than 1,500 experiences, aspirations, and ideas with each other and with the President’s Task Force on Inclusion and Belonging, all in the service of supporting academic and professional flourishing for all members of the Harvard community.

Participants stressed the need for better orientation and on-boarding for new staff and students, increased transparency to break down barriers that can separate insiders from outsiders in Harvard workplaces and departments, and stronger connections between staff and faculty. There were also calls for Harvard to value multiple dimensions of excellence and provide open spaces and opportunities for people to share stories and thereby increase mutual understanding.

Those and many other suggestions were brainstormed by about 750 students, faculty, and staff who took part in an Afternoon of Engagement on Inclusion and Belonging at Sanders Theatre and simulcast at the Martin Center.

The event was organized by the task force, which was created by President Drew Faust last fall to explore how Harvard can go beyond its gains in diversity to be more welcoming.

“Diversity, inclusion, and belonging are fundamental to our mission and our identity and essential for creating a better university. And the responsibility for that is one that’s shared by students, faculty, and staff, as well as alumni and friends,” Faust said in her welcoming remarks.

The key event of the task force’s ongoing discovery phase, the afternoon included storytelling, a trust-building exercise, and small group discussions in which participants shared their own experiences of inclusion and belonging, their visions of a more welcoming campus, ideas for promoting that goal, and how they can personally contribute to it.

The task force used the occasion to announce two new initiatives: an online forum to share ideas, dubbed the Solution Space, and a competition to rewrite the final line of the University’s alma mater, or to create an alternative musical variant or new performance mode for the alma mater.

“Storytelling is a powerful mode by which to explore the meaning of inclusion and belonging, and it is fitting that it’s central to this afternoon’s program,” Faust said. “To me, the experiences of others offer thresholds to moments of empathy, sympathy, compassion, and understanding.

“The University must be a place where people turn toward each other in the spirit of reasoned and respectful discourse, a place where ideas are tested and questioned and refined in the pursuit of truth,” Faust added.

Danielle S. Allen, James Bryant Conant University Professor and director of the Edmond J. Safra Center for Ethics, and co-chair of the task force, said hearing from campus members was vital to the group work, though she acknowledged the issue of inclusion is not easily discussed.

“It takes courage for people to share stories of difficult experiences on this campus and elsewhere,” Allen said. “It takes compassion to listen empathetically to stories of others whose experiences are very different from our own.”

As one of the speakers in the storytelling segment, Allen related her own difficulties adjusting to Harvard as a doctoral student, and her eventual decision to leave at a traumatic time for her family due to her cousin’s conviction in a criminal case.

“What I realized retrospectively was that the first three months at Harvard I could not put head and heart together, so I left,” said Allen, who later returned as a faculty member.

Others presenting their stories were Scott Abell, a member of the Harvard Board of Overseers; task force member Katrina Armstrong, Jackson Professor of Clinical Medicine at Harvard Medical School and physician in chief, Department of Medicine, at Massachusetts General Hospital; Kalan Chang, manager for overseas financial operations for the David Rockefeller Center for Latin American Studies and an Ecuadorian immigrant; and Eden Girma ’18.

Abell, who related his own challenges feeling at home as a Harvard student when his family was facing financial difficulties, said Harvard has made great strides since then in becoming more diverse. But he said these advances “don’t speak to what’s going on inside those who feel isolated.” He said Harvard now needs to seek the next level, which is “helping the people who you can’t look at, you don’t know their story … and to make them feel welcomed here.”

Among the themes emerging from the small group discussions was the anxiety felt by some on campus that “they’re just not good enough or smart enough to belong here,” said task force co-chair Archon Fung, Harvard Kennedy School academic dean and Ford Foundation Professor of Democracy and Citizenship, who was the small-group moderator.

Another was “the staff/faculty divide,” Fung said. “So many talked about not being treated as equal or with respect,” especially staff members by faculty. A third was that some for whom English is not their first language “feel at a disadvantage here.”

Other ideas offered for enhancing belonging included expanding training and mentoring programs, welcoming staff to events; incorporating new and different areas into the curriculum; and even a suggestion that people “lighten up.”

Task force member Frances Frei, UPS Foundation Professor of Service Management and senior associate dean at Harvard Business School, the facilitator of the trust-building exercise, said a diverse team outperforms a homogenous one, but only if the diversity is well managed.