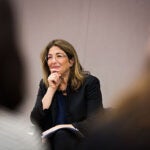 Climate change’s uncertainty — a product of the complexity of the natural systems involved and the vagaries of human efforts at mitigation — have led not to precise forecasts of future warming, but rather a range of likely temperature increases.

Weitzman said that the middle values of that range — in which effects would be difficult, but manageable — are cited so routinely that the upper end is too often forgotten, even though the warming at that level would be catastrophic and the chances are not negligible. Under optimistic scenarios of atmospheric carbon dioxide levels, there is a 10 percent chance that warming will top 4 degrees Celsius and a 3 percent chance it will top 6 degrees, he said.

Weitzman offered his perspective in a five-minute video, part of the Center for the Environment project “Harvard Speaks on Climate Change.” Thirty-five videos, featuring Harvard experts in science, business, law, health, economics, engineering, public policy, design, and the arts, have been assembled over the last year and a half as a resource for members of the public who want to learn more about climate change.

The project is the brainchild of the center’s director, Daniel Schrag, the Sturgis Hooper Professor of Geology and a professor of environmental science and engineering. The videos, which went live in the fall, are paired with explanatory and background material. As a resource they fit with the ongoing Harvard Climate Week, which includes a series of public events across campus.

The breadth of perspectives that Harvard faculty members bring to climate change has impressed Schrag in his years working on the problem. He wanted to share those perspectives with the public.

“It’s a way of giving the broader community — not just Harvard, but really the whole world — access to the amazing intellectual community that I get to interact with every day,” he said. “We have incredible depth of perspective and unbelievable depth of knowledge on all sorts of things, from aspects of the climate system to detailed understanding of carbon pricing and economics to legal, regulatory systems, and aspects of climate and literature.”

“Part of my point was to actually encourage people to see that all of these perspectives are needed to solve this problem,” he said.

Schrag identified candidates for the videos and worked with multimedia producer Alex Griswold to pull them together. Griswold met with each for an introductory interview and then for a recorded interview in which they talked about their work or an aspect of it related to climate change.

The interviews were edited from roughly an hour of raw footage to five minutes, and supplemented with graphs, charts and other elements that help explain subjects ranging from atmospheric chemistry to public policy. The site went live in September with 30 interviews. Five have been added since.

“My job was to try to make a short video, accessible to a wide audience, to really talk about the central issues Harvard climate researchers are working on,” Griswold said. “For me it was such a great learning experience.”

While every viewer will take home different lessons from the videos, Griswold was struck by the discussion of climate change economics and public policy from Associate Professor of Public Policy Joe Aldy and Albert Pratt Professor of Business and Government Robert Stavins. He also pointed to perspectives on law from Archibald Cox Professor of Law Jody Freeman, discussion of science denial by History of Science Professor Naomi Oreskes, and insight on the power of photography in environmental advocacy — and how that fails when talking about climate change — from Shirley Carter Burden Professor of Photography and Dean of Arts and Humanities Robin Kelsey.

At a time when leaders in Washington appear unlikely to take action on climate change, said Schrag, it becomes more important that knowledgeable voices be heard.

“This will require the best minds at Harvard and elsewhere to solve,” he said. “This is one of the great challenges of our time.”