‘Make it new’ isn’t for everyone 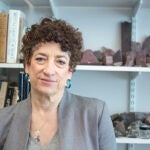 In Harvard-led paper, some insight on audience-friendly storytelling, and the limits of imagination

Telling stories — it’s a form of communication we’ve been perfecting for millennia. But according to new Harvard research, storytellers still need to work on striking a balance between old and new or risk losing their audience.

A paper recently published in Psychological Science finds that although people most enjoy telling a new story, what listeners really seem to crave is something familiar. Speakers are eager to captivate their listeners and think a new story is the best way to entertain, the research notes. But the study also found that speakers telling original stories are often assessed a “novelty penalty” by listeners who find it hard to follow the new information.

“It struck me that we always try to add these novel stories to conversations, and then it doesn’t go over as well as we think and then conversations kind of naturally drift back towards talking about familiar things or things that we have in common with other people,” said lead author and Ph.D. student in Harvard’s Graduate School of Arts and Sciences Gus Cooney, who wrote the paper with happiness guru Daniel Gilbert, Harvard’s Edgar Pierce Professor of Psychology, and Timothy D. Wilson, a University of Virginia social psychologist.

Long fascinated with how we communicate, Cooney said his own storytelling experiences, along with countless conversations through the years, inspired him to explore the notion that while “speakers may think listeners will be delighted by novel stories, familiar stories might actually delight listeners much more.”

To test the hypothesis, Cooney and his team recruited 90 Harvard undergrads for a series of studies. In their lab they designated half of the participants speakers while the other half were assigned to the listening camp. As part of the experiments the listeners watched one video, while the speakers separately watched the same or a different video. The speakers were then asked to tell the listeners a story about the video the speakers themselves had watched. Before telling their stories, researchers asked the speakers to predict whether the listeners would enjoy hearing more about the familiar or unfamiliar video.

“The speakers thought listeners would enjoy hearing about a novel story,” said Cooney. “In fact, listeners enjoyed the familiar story much more.”

What accounts for the discrepancy? When deciding what to tell others, storytellers face a delicate balancing act, said Cooney. They want to interest their listeners and offer them as much novel information as possible, but they also want to be careful not to confuse them along the way. “It’s a hard thing to negotiate,” Cooney said.

Interestingly, the audience initially got it wrong, too. Asked in advance, listeners expected to prefer a story about the video they hadn’t seen. Yet the study’s results showed that they favored the familiar.

According to Cooney, the explanation involves missing information.

With a familiar tale listeners can use their own experience to insert key pieces of the story the speaker may have left out. With a new story, the listener doesn’t have that reservoir of knowledge to rely on if the speaker happens to omit something important from the narrative.

“In our study, when both parties had viewed the same video, if the speaker made a mistake about something in their story, the listener could just fill in the information since they had seen the same video,” Cooney said. “But when the listener hadn’t watched the same video and didn’t have that necessary background knowledge, it was very easy for them to get confused.”

Fortunately, Cooney isn’t worried that his research points to a general lack of listener imagination, but rather difficulty keeping up.

“If I am telling you a story about Turkey or Thailand you may start to imagine it, but as the story goes on I start introducing new characters and new places and things that I’ve done, I think our imaginations can often fail us if we’ve never been to those places ourselves,” he said. “Imagination is great, but it also has its limits.”

What’s Cooney’s biggest takeaway from the findings? When telling a story, speakers should aim for clarity over cutting edge.

“Obviously I would never want to say that we shouldn’t tell people novel stories,” said Cooney. The trick, he said, is to balance being interesting with being understood. “Basically we should err more on the side of not trying to confuse our listeners rather than always trying to delight them and interest them with novel information.”