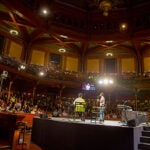 Brooke Bourgeois needs more than one subject, one story, or one punch line to describe her evolution at Harvard

Med school or an artistic career?

The healing arts or … healing laughter?

Harvard senior Brooke Bourgeois is looking for the humor in her dilemma. She has worked for four years to develop from a science newbie into a senior about to graduate with a bachelor’s degree in neurobiology with her sights set on medical school.

But Bourgeois is no science geek. She’s also a painter, a cartoonist for the Harvard Lampoon, and a standup comedian with an improv group. She’s concerned that medical school’s infamous pressures will squeeze the art out of her life.

So, she’s going to Scotland.

Bourgeois is one of a handful of seniors embarking on a Michael Rockefeller Memorial Fellowship for the year after graduation. The fellowship will allow them to explore the world — and themselves ­— by immersing in a foreign culture. The fellowship discourages formal academic study or work preparatory to a career. Its website states that the year “should be planned with the idea of exploration, challenge, and new discovery.”

That appeals to Bourgeois, whose improv experiences with Three Letter Acronym, or TLA, sparked an interest in storytelling, which found further expression in her cartooning and personal art and her membership on the Harvard Advocate’s art board.

After graduation it’s off to Edinburgh, home to the Scottish Storytelling Center and host to an annual arts festival that features storytelling. Bourgeois will study the Scottish tradition of ceilidh, a festive gathering involving storytelling through poems, songs, and dance. She is still figuring out the details, but said that having the fellowship to look forward to has allowed her to enjoy her last months on campus without the uncertainty many seniors feel as Commencement approaches.

“Art is about finding stories that are meaningful and translating them through painting, through comedy, and making them meaningful again to the audience,” Bourgeois said.

Bourgeois sees the year as a time to develop her own storytelling skills, to connect with the local Scottish arts scene, and to give her creative side free rein and see where it takes her.

But she’s trying not to become too attached to any plan. Former Rockefeller Fellows have told her that the fellowship’s open and unstructured nature means that they often found themselves on paths sometimes far different from those they envisioned.

“They said, ‘You think that’s what you’re going to do. The one thing I can tell you is that you will not do the thing you set out to do,’” Bourgeois said. “I’m surprisingly OK with that. [This year is] to figure myself out.”

Bourgeois grew up in New Orleans and attended a girls Catholic high school. As a senior, she enrolled in programs at the New Orleans Center for Creative Arts, leaving school halfway through the day to travel across town.

“I was always a girl covered in paint, it was my thing,” Bourgeois said. “[My parents] always laughed about the starving artist thing, even though it’s the thing that I do best.”

But under the paint was a budding interest in science. Sparked by her brother’s autism, Bourgeois began watching TED talks about the brain and became fascinated by the differences that result in autism and how the brain’s physical processes translate into, as she put it, memories of one’s grandmother or the smell of cookies.

When she arrived at Harvard, she decided on a neurobiology concentration. It didn’t go well at first. Bourgeois had a strong grounding in biology, but didn’t feel as prepared for other scientific subjects.

A key development was finding the self-described group “biobabes,” women science concentrators who gathered weekly for dinner and study. Bourgeois found herself immersed — eating, sleeping, dreaming about science — even finding the traditionally tough pre-med offering of organic chemistry to be one of her favorite classes.

“I’d go on runs and think about benzene, a very stable molecule: I am benzene today!” Bourgeois said. “It was the most immersive academic experience I had.”

Ryan Draft, assistant director of undergraduate studies in neurobiology and Bourgeois’ adviser, described her as “a serious student of science,” one who is “unique,” with broad academic interests.

“Although I have not seen her perform, there is a certain confidence and adventurousness that is palpable when you meet her, which must come from her experiences onstage,” Draft said. “Having a year to explore a new culture provides the time and raw materials to reflect deeply on life and try out new and unconventional ideas about yourself.”

Freshman year was also tough outside the classroom, Bourgeois tried to join the Harvard Lampoon, but was unsuccessful. On a whim, Bourgeois tried out for Three Letter Acronym. Though she’d never done improv, Bourgeois said she immediately liked the form’s spontaneity and the trust that exists between performers. Being able to get a few laughs didn’t hurt.

“I just remember feeling bliss, a pure brain state of joy,” Bourgeois said. “I’ve never been able to trust so many strangers who randomly throw out an idea and take it so literally: ‘Oh, yes, you are a crazy grandmother in Poland.’ And to have people laugh like that. That was the best afternoon I had on this campus. Period.”

Bourgeois called improv “the thing that kept me alive” during good times and hard times, something of an extracurricular home.

By her junior year, Bourgeois had most of her pre-med requirements completed. She hadn’t touched a paintbrush or a drawing pencil for two years, so she took a silk screen class. Her project, a multilayered work illustrating a woman’s battle with breast cancer, married her interests in art and science. The viewer sees through layers of translucent fabric as the woman progresses through the disease, from diagnosis to chemotherapy, and then death.

Bourgeois took a second artistic step that year, trying again and getting on the Lampoon.

Other art courses followed, including one on animation, which Bourgeois says is a recent passion.

“She has a sense of humor,” Saunders said. “She was fearless in class and jumped right into everything.”

Bourgeois is looking forward to art editing the Lampoon’s Commencement issue, including drawing the cover. As she runs along the Charles River, she’s not thinking about stable molecules but listening to standup routines and imagining cartoons.

“Two dinosaurs think a chicken is their baby and one thinks the other is cheating,” Bourgeois said. “It’s an evolution joke.”