The sexual exploitation of child migrants 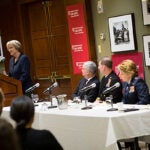 For U.S. military, ideals must matter

Closed borders, unsafe holding camps, and increasing desperation have created an “emergency within an emergency” concerning child sexual abuse and exploitation among migrants who are stalled in Greece, according to a new report by Harvard’s François-Xavier Bagnoud Center for Health and Human Rights (FXB Center).

The report released last week describes abuses in the crowded, makeshift holding camps, unstaffed at night and with inadequate lighting, where lone men and those associated with criminal gangs prey on children left unattended.

Older boys and girls are allowed to leave camp and sometimes engage in prostitution in hopes of saving enough to pay traffickers to smuggle them to their destination country, often Germany, Britain, or Sweden. The sex they provide brings in so little cash, €15 an encounter, that smugglers’ fees often remain out of reach. Drug use increases the danger the child will become trapped in the commercial sex industry, said the report, “Emergency within an Emergency: The Growing Epidemic of Sexual Exploitation and Abuse of Migrant Children in Greece.”

While the report focuses its attention on that country, it’s co-author, Jacqueline Bhabha, research director of the FXB Center, said the situation is likely similar in other European nations, such as Serbia and Italy. She cited a 2016 Europol report that said 10,000 children known to have entered Europe during the refugee crisis have disappeared. While some likely have united with family members or are working in the unofficial economy, some have been preyed upon and trafficked, said Bhabha, professor of the practice of health and human rights at the Harvard T.H. Chan School of Public Health.

The investigation underlying the report was conducted last November at four locations in Greece, on two islands that are frequent entry points for migrants, Lesbos and Chios, and in two cities where many migrants are held after their initial entry, Athens and Thessaloniki.

The report’s primary author, Vasileia Digidiki, a research fellow at the FXB Center, interviewed 24 experts, including psychologists, government officials, and physicians. Because of ethical concerns, she didn’t interview children who had been raped or otherwise abused. She also conducted field observations, visiting sites her interview subjects identified as hubs for the local sex trade and the sexual exploitation of children, including Athens’ Victoria Square and Pedion tou Areos Park. What was happening was obvious, she said.

“You can see it,” Digidiki said. “You see the child waiting, a client approaching. You see the initial contact and see them going away together.”

The report outlines the preconditions and the context of the crisis, though it doesn’t define the numerical scope of what is happening, in part because its illegality and the shame felt by its victims keep it in the shadows, and in part because it is not yet of enough concern to a government agency that can conduct further investigations.

Bhabha avoided blaming the Greek government, saying the nation has shouldered an overwhelming burden during the refugee crisis, especially as it occurred as Greece was struggling to emerge from financial crisis.

The migrants’ plight has worsened as more nations have closed their borders. Migrants find themselves stranded for longer periods in first-stop countries such as Greece, which previously they would have passed through to their final destinations. Now, Digidiki said, people — including children who often have been tasked with earning money to send back home — grow increasingly desperate to move on. If they can’t do it legally, they try to raise the money to pay smugglers.

Though commercial sexual exploitation is a clear focus of the report, also important are physical violence and sexual assault in the camps where migrants are held. Psychological violence can include the lasting fear, shame, and humiliation of such violations, sometimes worsened when children are blackmailed with images of their abuse. Then there are child marriages, in which girls are married off to older men, a practice often hidden because marriage under 18 is illegal in most European countries.

The investigation is an outgrowth of two center reports last year. One was an examination of the migrant experience on Lesbos, and the second a report on the plight of child migrants. It was apparent as those reports were being assembled that child sexual exploitation needed a closer look, Bhabha said.

The new report contains numerous recommendations, including increasing the presence of trained police in camps; physical improvements such as adding lighting and separating sanitation facilities for men and women; and providing areas for families with children and children traveling alone. The report also recommends improving child welfare services, integrating migrant children into the education system, improving data collection, and raising awareness in the local population.

Bhabha said she believes what the report describes is just the tip of the iceberg. The broader goal, she said, is to put the problems on the radar screens of officials in Greece and other nations, so additional investigations and multinational solutions can begin to be devised. There is some urgency, she said, because the fighting in their homelands is still driving migrants to the road. Also, spring has arrived and will bring more migrants.