Facing future with hands-on empathy for others 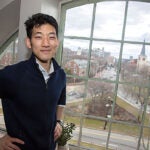 It’s an undergraduate prerogative to sample various fields and disciplines hoping to find a life purpose. Elaine Dong was resolute about hers when she got to Harvard, and she had learned her resolve through many trials that shaped her, physically and emotionally.

Dong was born with a severe cleft lip and palate, in her case so extreme that she was not expected to live, let alone eat, drink, speak, or even breathe normally.

But she did all of that, though with deformities to her face and teeth that provoked some terrible taunts. After nine grueling surgeries, her face was repaired and changed — along with her outlook on life, and her ambitions.

“I wanted so desperately to be normal,” Dong said of her childhood. “I didn’t know it at the time, but I was dealt one of life’s greatest hands.” Today, at 22, she is determined to become a surgeon and help change the lives of children born with congenital birth defects.

“There are still moments when I cry from surprise after realizing that I have found purpose and that I feel truly happy for the first time in a decade,” she said.

The surgeries also left Dong determined to overcome anger, self-hatred, and self-doubt. In a burst of confidence during her senior year of high school, she went from feeling like a shunned loner to being a member of the student council.

And then she applied to Harvard.

“At the end of high school, I decided I really wanted to dedicate my life to helping children who, like me, because of a health condition outside of their control, perhaps never thought they could do something more with their lives,” said Dong. “But after having a few well-performed surgeries, it can totally change their life trajectory.”

After an Early Action decision, Dong found herself on a new and empowering course. She came to Harvard as a biology concentrator, but in her freshman year her passion for oil painting and animation drew her to Visual and Environmental Studies (VES) as a way to explore her creativity, maybe for the last time.

As a pre-med student, Dong’s decision to seek a VES degree at Harvard became a path that has kept her close to her purpose.

“I saw this as my last chance to do something that’s not totally medicine,” she said. “I think I even had a much easier time in organic chemistry because of the spatial reasoning I learned from my visual arts experience.”

Dong quickly found a way to apply her VES talents. The summer of her sophomore year, she connected with the Global Smile Foundation, a Massachusetts nonprofit dedicated to helping children around the world born with congenital facial deformities. Under the direction of the foundation’s president, Usama Hamdan, she created an animated video about surgery for educating potential patients and their families. The video doubled as Dong’s final project for her “Animating Science” class.

Dong also shadowed two surgeons at Boston Children’s Hospital, Bonnie L. Padwa and John Mulliken, an experience she said helped her discover her ability to connect deeply with patients while also focusing on their needs.

“Harvard offered me the chance to thrive and find happiness,” she said. “I learned to feel comfortable around others, hold their hands firmly, and look them in the eye.”

Dong embraced that freedom and used all four years to explore whatever called passionately to her. Each summer she found new experiences that combined her mission with her creativity. After her freshman year, Dong spent 10 weeks in Japan with a Harvard summer research program on immunology, becoming fluent in Japanese. Last summer, she spent eight weeks in South Korea putting together “Made in Korea,” a documentary exploring the popularity of elective plastic surgery and its societal impact there.

Dong said her summer experiences were some of the most amazing things she has done.

“Growing up I developed this sense of ‘I do things because I want to, not because I feel pressured,’” said Dong. “That’s what drives me.”

In her spare time, Dong is a four-year member of the Asian American Dance Troupe. She spends more than 30 hours each week pursuing her love of traditional and contemporary dance, an art form she has enjoyed since she was 10.

After graduation, she plans to relax, she said, before the fall, when she will attend Baylor College of Medicine in her hometown, Houston.

“I feel like I’ve been working at a very high level of energy for a very long time and it will be nice to relax with my family for a couple of months,” Dong said. “But I will miss my friends, inspiring peers, and the insanely smart and accomplished, really talented people at Harvard.”

The once painfully shy little girl now feels grounded and determined about who she is and who she wants to become.

“In retrospect, the birth defects and the pain that came with it were a gift,” Dong said. “I realize I have been given a chance to convert my fire and my pain into the fiercest fuel … an indestructible desire to touch the lives of thousands of others just like me.”