For her, home is the heart of the matter 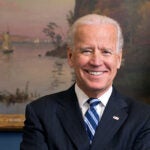 Dana McKinney puts the power of architecture to work for people

When Dana McKinney was a girl, her family drove every week from their small town in Fairfield County, Conn., to Sunday dinner at her grandmother’s home in Newark, N.J. To a child who loved dance and art, the changing scenery on those trips revealed stark contrasts that stung of economic inequality.

“I was going back and forth between a very comfortable lifestyle in Connecticut to a very depressed environment in Newark and became really inspired to look at how people can affect the built environment,” McKinney said. “I want to be able to fix this! — That was my immediate reaction — I’ll be an architect!”

After studying architecture at Princeton University, McKinney came to Harvard Graduate School of Design (GSD) in 2012 to earn master’s degrees in architecture and urban planning. It’s an unusual and demanding course of study, but one McKinney felt would merge her design work with her interest in social change, social justice, and the power of architecture to transform people’s lives.

“I want to make beautiful spaces and buildings, but I don’t want … the pitfall of only working with elite clients, and I think a lot of times architects end up serving a very high-income population. A majority of housing is done by developers in the U.S., [so] good architecture barely reaches outside a certain economic class,” McKinney said.

Much of her academic work has focused on how design and living interact: improving elderly housing and studying the effects from the abrupt closure in 2014 of a large homeless facility in Boston.

But with one in four Newark residents likely to spend some time in prison, McKinney’s thesis focused on “sensible and sensitive” design alternatives to prison that would help break the cycle of incarceration and poverty. It was an unconventional choice. When she put her idea before her faculty advisers, “I could hear the crickets in the room,” she said. But “by the end of it, they were all about it.”

While McKinney doesn’t believe architecture alone can end homelessness or poverty or incarceration, she does believe the field has something important to offer. “Everyone has a role in social development and in making sure that our society is a reflection of what we want it to be.”

Indeed, though “spatial justice” is often thought of as an enterprise in the public realm, like the construction of parks and community centers, it’s not as frequently addressed in the private realm. Because housing is essential to well-being, McKinney hopes to eventually create spaces that promote not just equality, but equity. “Your self-worth and what you need to do well as a person starts with the safety and comfort you feel in your own home,” she explained.

Outside the classroom, McKinney has been active in bringing together African-American students at GSD and shining a spotlight on black women and men in a field where only 1 percent of architects are African-American.

Having sometimes found herself one of only two black students in a class of 80, McKinney was among the earliest members of the African-American Student Union five years ago, serving last year as its president. The group grew from six to 30 members, promoting the work of black design professionals, doing outreach to high school students considering architecture as a career, strategizing ways GSD could recruit more black students, and offering guidance to prospective applicants.

Perhaps most important, the group afforded its members respite from feelings of isolation. “For a lot of us, it made life at Harvard go by a little bit faster [to] know that we had a really supportive community for one another,” McKinney said.

In 2013, McKinney and some of her classmates orchestrated a clandestine visit to Harvard by rapper Kanye West and his wife, Kim Kardashian. West, who started a design firm in 2012, spoke privately to students about his interest in architecture and his belief that design “can save the world.” (This started with the hand-delivery of an invitation to West’s lawyer in New York. McKinney said, “There was maybe about a month of lag, and then on a Thursday afternoon, we get a phone call from Kanye’s … manager, who said, ‘He’s going to be here on Sunday. He has a concert in Boston. You have two hours.’ And he came!”)

In 2015, McKinney helped organize the School’s first Black in Design conference. The event hosted hundreds of designers, architects, and urban planners from across the country to showcase their work, share experiences, and discuss issues in the field. It was so successful that a second conference is planned for the fall.

With her graduate work complete, McKinney moved to Los Angeles in March to work as an architectural designer for Frank Gehry, the Pritzker Prize-winning architect.

After spying Gehry, GSD ’57, Ar.D. ’00, sitting alone during his visit last spring to receive the 2016 Harvard Arts Medal, McKinney struck up a conversation about architecture and community development. She left with his phone number and a request to call when she graduated. Although best known for splashy, undulating structures that disrupt the surrounding landscape, Gehry also has been credited with bringing about social change by jump-starting local economic and cultural revitalization efforts wherever he builds.

For McKinney, leaving Harvard for this next chapter has been exhilarating — and emotional.

“I feel like I’ve made an impact on the School and I think the School’s made an incredible impact on me, my worldviews … re-engaging me in things that I hadn’t really thought about in the past few years. Also, it’s given me much more of a voice,” she said, reflecting on her many leadership roles.

“I’ve really come into my own and have been so incredibly thankful and fortunate to have had that experience.”