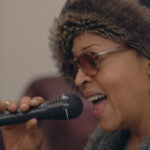 ‘Regional Study of Sicily’ turns student into ‘a true classicist’

I’d never thought that a spring break jaunt could change a person. But sometime during the Classical Studies 112 class trip to Sicily, I became a true classicist.

Maybe it was the hills and fields of Mount Etna, the rural landscapes Pindar wrote about in his epinician odes. Maybe it was our visit to Palermo, Marsala, Siracusa, Piazza Amerina, and the Egadi Islands. Whether all or one, the effect was transformative.

A required course for classics concentrators at Harvard, “Regional Study of Sicily” is unlike any other class I have taken. Just as important as the all-expenses-paid trip was the chance to get to know my classmates and professors on a personal level, while getting physically and intellectually closer to the sites and monuments we have studied for years.

Our first stop was Palermo, Sicily’s largest city, and the Norman Palace with its famous Palatine Chapel. While the overwhelming mosaics commanded our attention, one of our professors pointed out the polychrome marble floor: Its design elements, like the purple porphyry discs, he told us, were spolia — reused building stones stripped from a Roman structure dating even further back in the city’s history. The Capuchin catacombs were just as intriguing. Beginning in 1599, Palermo’s elite mummified their dead and displayed them inside the maze of the catacombs, where their relatives and friends could visit them.

On day three, we arrived in Segesta, a site famous for its unfinished Greek-style temple. Segesta was a settlement of Elymians, an indigenous group who served as intermediaries between the dominant powers in Sicily — the Carthaginians, Greeks, and Romans— at any given time. The temple was apparently built to appeal to the Greeks, but left unfinished to appeal to the Carthaginians.

From Segesta we traveled to Trapani, and from there to the Egadi Islands, the site of an instrumental naval battle between the Romans and Carthaginians. While the history is fascinating, some of us were more taken with the ruined castle on the hill overlooking the city. After an arduous, steep climb, the view from one of the towers rewarded us with the most remarkable vista in all of the islands.

Our next stop was the capital of Sicily’s wine country, Marsala. While the wine was sweet, the island of Motya, a Carthaginian city destroyed in 397 B.C., was sweeter. Its ruins, some now below the tidewater, hinted at its former grandeur, and a few of us waded through the icy water to walk on the sunken causeway. At Selinunte, a ruined Greek seaport with five temples, we had the amazing experience of climbing the ruins of Temple C, traversing it like an obstacle course from one end to the other.

A four-hour bus ride, with coastline giving way to fields and farms, took us into Sicily’s interior and the town of Piazza Armerina, known for its isolation and its more than 100 churches. At the Villa Romana del Casale, we saw its famous mosaics, like the Great Hunt, firsthand.

Our last stop was the site of my class presentation, Siracusa (Syracuse). Founded in either 734 or 733 B.C., Syracuse was once the most powerful Greek city in Sicily. It was amazing to stand in the land I have studied for so long. We stayed on the island of Ortygia, the old city center. Looking out over the Great Harbor, I remembered that this was the site where the Syracusan navy trapped the Athenian fleet at the end of their disastrous Sicilian expedition.

The morning after, I presented the famous sites of the Syracuse Archaeological Park to the class: the gardens; a former stone quarry; the Ear of Dionysius, a cave famous for its acoustic properties; the Greek and Roman amphitheaters; and the Altar of Hieron II, a massive Hellenistic altar with no parallels in the classical world.

The trip was finally capped as we made our way to Catania Airport at 3:30 a.m., and saw lava and smoke spilling from Mount Etna, which had erupted earlier. It was a fitting end to a transformative trip, in which a Harvard class was changed from classics scholars to classicists.