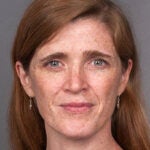 Six years ago, when Gabi Diligent arrived in the United States, the odds of achieving the elusive American dream were not in her favor. The 22-year-old had just left her native Haiti in the wake of a devastating earthquake. Arriving in the greater Boston area with her mother and five siblings, Diligent didn’t speak a word of English.

Today, she speaks it effortlessly. What’s more, she has a driver’s license, owns a home, and is working toward her high school diploma. And just last year, Diligent became a U.S. citizen.

“My life has changed over the last four years,” she told an audience who gathered Tuesday evening for a dinner celebrating the 14 Harvard employees who this year became U.S. citizens with help from the Harvard Bridge Program. “I have accomplished a lot. I am very proud of how far I have come.”

She has reason to be. After securing a position in custodial and cleaning services at Harvard, Diligent connected with the Bridge Program, an education and training curriculum offering courses in career, language, and computer skills to Harvard faculty and staff. The program pairs prospective citizens with student volunteer tutors from the Institute of Politics (IOP) at the Kennedy School. Since the program began in 1998, roughly 231 new citizens have completed it.

“The Bridge Program means a lot to me,” Diligent said.

“Citizenship is not something to be taken for granted,” Harvard President Drew Faust told the audience. “For those of us who were born in this country and didn’t have to pass a test — and didn’t have to be challenged — we remind ourselves today that it is an enormous privilege to have citizenship, and that it comes with very special responsibilities.”

The test Faust referred to was the civics component of the naturalization test. All applicants for citizenship must memorize 100 questions and answers covering American history, civics, and government. With the aid of a Bridge Program tutor, Diligent worked tirelessly to master all of the topics.

Other speakers included Maggie Williams, director of the IOP, who briefly told of her own family history and their struggles emerging from poverty. “We honor your journey to citizenship, and I am grateful for all you have done and will do to enrich this country,” she said.

Carol Kolenik, director of the Bridge Program, summed up its spirit by quoting the legendary humanitarian Albert Schweitzer: “The purpose of the human life is to serve, and to show compassion, and the will to help others.”

Tamara Suttle, program coordinator and instructor at the Bridge Program, described how this spirit is exemplified in Joseph Passeri, a program instructor who was honored Tuesday. Passeri teaches language and citizenship classes at Harvard Medical School for custodial staff who work the evening shifts. On Tuesday and Wednesday nights he teaches from 10 p.m. to midnight, and on Thursdays from 9 p.m. to 10 p.m.

“Thank you for your dedication to your students, and all you’ve given the program over the last 15 years,” said Suttle.

Civic responsibility, for citizens old and new, was an overarching theme. Lars Peter Knoth Madsen, Faust’s chief of staff and a native of Denmark who last year became a citizen, reminded the audience of the importance of voting rights, a sentiment that echoed Faust.

“As I congratulate the new citizens, I also want to say to those who have been citizens for a long time, remember how precious your citizenship really is, and use it,” said Faust. “Take up not just its privileges, but also its responsibilities, in service … to one another and to the larger ideal of what citizenship must mean in this country, which is openness and opportunity and the embracing of difference, and the recognizing that we are all stronger if we are together as we think about what this country can be.”