The ties between Berlin, Istanbul 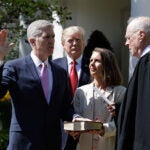 Behind the Gorsuch nomination

As Europe copes with its largest flood of migrants since World War II, the modern history of German refugees taking refuge in Istanbul and of Turks in Berlin offers unique insights that could help guide policymakers, according to scholars at a Harvard conference.

Using the Berlin-Istanbul connection as a focus, speakers at “Finding Refuge: Istanbul-Berlin” on Saturday at the Minda de Gunzburg Center for European Studies (CES), a colloquium jointly organized by the Harvard-Mellon Urban Initiative and the Özyeğin Forum on Modern Turkey, highlighted the devastation experienced by populations subject to forced migration, as well as the positives that can occur when refugee and host cultures mix.

Berlin and Istanbul “are two cities that share … a very troubled relationship with history, but also quite a long history of various exchanges throughout the 20th century,” said Sibel Bozdoğan, chair of the architecture department of Kadir Has Üniversitesi in Istanbul and a lecturer in urban planning and design at Harvard. Bozdoğan coordinates the Istanbul portal for the Harvard-Mellon initiative.

Following the rise of the Nazis in the 1930s, Turkey hosted numerous German exiles, many of whom received key university posts. A large number of Turks, meanwhile, fled to Germany following the 1980 coup and subsequent violence in Turkey. Istanbul and Berlin played key roles in hosting those respective waves of migrants.

“The connections between Istanbul and Berlin are longstanding, multiple, and complex,” said Eve Blau, adjunct professor of the history of urban form in the Department of Urban Planning and Design, and a principal investigator at the Harvard-Mellon Urban Initiative. She said looking at their shared refugee story helps illuminate those historic links.

The conference also delved into issues relating to migrations past and present, ranging from the distinction between intellectual exiles to the human rights implications of the current refugee crisis.

“Nothing exposes the contradictions of globalization and the limits of contemporary human rights as effectively as the refugee,” said Esra Akcan, associate professor of architecture and incoming director of the Einaudi Center for International Studies at Cornell University. “The stateless put into question the very limits of the human rights that are defined under the precondition of being a citizen of state.”

The Harvard-Mellon Urban Initiative is a four-year project bringing together scholars and designers to develop visual and digital methods and cross-disciplinary approaches to studying urban environments and cultures. The initiative is funded by the Andrew W. Mellon Foundation.

Over the past three years, the initiative has carried out urban research projects in Berlin, Boston, Istanbul, and Mumbai. More recently it shifted to public programming and outreach, including Saturday’s event. Two years ago, the Özyeğin Forum was created at CES by the family of Hüsnü Özyeğin, M.B.A. ’69, to encourage the study of Turkey and its relationship with Europe.

Kader Konuk, professor and chair of Turkish Studies at the Universität Duisburg-Essen in Germany, sounded an alarm at some of the conditions sparking the current wave of migration, and in particular the increasing crackdown on academics in Turkey and elsewhere.

“Academic freedom, a cornerstone of every democracy, is under threat because of the rise of populism and authoritarian regimes worldwide,” she said.

Konuk said that many university scholars who signed a 2015 peace petition in the wake of Turkish military action against Kurds have been imprisoned or banned from their professions. Hundreds have fled Turkey, with 100 seeking asylum in Germany in 2016.

Konuk discussed the flight of intellectuals in the opposite direction, from Germany to Turkey, after a 1933 German decree that allowed academics to be discharged on political or racial grounds. She said those primarily Jewish academics played key roles in helping Turkey implement plans to build a modern, secular society.

“Without the influence of any academics from Germany,” Konuk said, “it is impossible to imagine the secularization of Turkey’s universities and the establishment of new disciplines.” She said it was “also part of the history,” though, that Turkey accepted Nazis into its faculty, even after the war.

Some thinkers have sought to offer an empowered image of exiled intellectuals as representing the vanguard of their people — if they keep their identity — but Konuk said that idea “readily reduces the exile to a mere metaphor” and “diminishes the existential plight of those expelled.”

Bernd Nicolai, chair of architectural history and cultural heritage at the Universität Bern in Switzerland, detailed how German exile architects in Turkey during those years “were highly influential in creating a new republican modernist architecture.”

Just as Turkey’s acceptance of German exiles saved many of them from persecution or death, Nicolai said that “Europe, especially Germany, has an obligation to assist nowadays Turkish refugees.”

She said the Kurdish “journey of exile to Europe,” including migration in the 1990s, was a traumatic experience but also had “an unexpected effect of empowerment for the Kurds,” spurring them establish a television station and a Kurdish language institute.

Philipp Misselwitz, an architect and urban planner based in Berlin, as well as chair of the habitat unit at the Institute for Architecture at Technische Universität Berlin, spoke of his work exploring potential alternatives to the sterile, container-type housing units springing up in Berlin and elsewhere to accommodate the current wave of refugees.

As part of that work, he studies the physical modifications to the units that the migrant families devise to “carve out spaces of self-determination and self-provision within very authoritarian, top-down, organized humanitarian settings.”