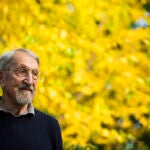 'When you do what you love, the most amazing things can and will happen'

When writer Antwan Steele arrived on campus as a speaker for the Leadership Conference of the Harvard Graduate Council (HGC), he admits he felt both pride and intimidation.

“I’ll be honest: Initially, I was intimidated when I was first asked to speak at Harvard Graduate Council’s Leadership Conference,” said the author of “Single to Single.”

The eighth annual conference brought together leaders in social development, business, finance, and entertainment to discuss key attributes that lead to success.

Steele’s message focused on leadership from a foundational level. His message resonated with the audience loud and clear because of his emphasis on “doing what you love.”

The audience grew larger as students who had arrived in Cambridge for the Global Case Competition also attended the conference at Harvard’s Northwest Science Center.

Peter Dyrud, president of HGC, opened the floor by telling the audience how amazing it was to see people from all over the world present under one roof, sharing a common vision of success and what it takes to achieve it.

Bruno Sergi, an associate of Harvard’s Davis Center for Russian and Eurasian Studies, emphasized the importance of creating a global platform to link entrepreneurs from all over the world.

Pavel Krapivin, a graduate of Harvard Business School, talked about working as vice president of Warner Bros. Entertainment and shared a story about being fired from his first job on the second day. He likened his corporate success to overcoming his fear of sharks. Now, he is the founder and CEO of VelvetJobs, a career matchmaking service that is currently used by more than 15 million people. He said it was featured in Forbes magazine as one of the key companies leading the transformation of the $5 billion career transition market.

The panel also included Abigail Ogilvy, who owns an art gallery in Boston’s SoWa art and design district. She said, “It is important to chase your passion, and do what you love. It isn’t work if we are doing what we enjoy.”

Steele, whose “Single to Single” focuses on maximizing our time during our “singleness,” talked about the importance of forming lifelong relationships. One of his initiatives is a successful summer cookout. The event brings together thousands of people and spreads awareness of giving back to the community.

Among the other speakers were: Dolly Amaya, a former student of Harvard Extension School who now runs a financial group providing advice and assistance to individuals; Russian editor Pavel Koshkin, who offered advice on spotting fake news; and physician Lisa Miller, who addressed the importance of the development of healthy habits.

The evening also included Harold Kent Heredia, a former student of Harvard Extension School, now working for human social rights. As a former asylee, Heredia’s story laid a foundation for belief in endurance and overcoming the odds. He shared his experience and growth, while addressing some of the pertinent and prominent issues facing the world.