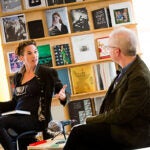 Scholar Danielle Allen: ‘We knew we had a mystery. We had a big, big mystery.’

It started with a one-line entry from the catalog of a tiny records office in the town of Chichester, in the south of England: “Manuscript copy, on parchment, of the Declaration in Congress of the thirteen United States of America.”

As part of an effort to assemble a database on every known edition of the Declaration of Independence, Emily Sneff, a researcher with the Declaration Resources Project, stumbled upon the listing in August 2015. Although she didn’t think much of it at the time, that short description would send Sneff and Harvard’s Danielle Allen on a two-year journey into American history.

“I’d found vague descriptions of other copies of the Declaration that turned out to be 19th-century reproductions of the signed parchment in the National Archives, so that was what I was expecting,” Sneff said of her initial impression based on the catalog listing. “What struck me as significant was that it said manuscript on parchment.”

Sneff contacted the archive, the West Sussex Record Office, whose staff mailed her a disc with photos of the document.

“When I looked at it closely, I started to see details, like names that weren’t in the right order — John Hancock isn’t listed first, there’s a mark at the top that looks like an erasure, the text has very little punctuation in it — and it’s in a handwriting I hadn’t seen before,” she said. “As those details started adding up, I brought it to Danielle’s attention and we realized this was different from any other copy we had seen.”

“We knew we had a mystery,” said Allen, the James Bryant Conant University Professor and director of the Edmond J. Safra Center for Ethics. “We had a big, big mystery.

“There are three key questions we want to answer,” Allen continued. “One is: Can we date this parchment based on the material evidence? Second: Who commissioned it, and why? And third: How did it get to England?”

Allen and Sneff are now providing some answers with a pair of papers. The first, currently in the final revision stage with the Papers of the Bibliographical Society of America, uses handwriting analysis, examination of the parchment preparation and styling, and spelling errors in the names of the signers to date the Sussex Declaration to the 1780s.

The second paper, presented at a Yale University conference on Friday, argues that the document was probably commissioned by James Wilson of Pennsylvania, who later helped draft the Constitution and was among the original justices of the Supreme Court.

But the document isn’t simply a previously unknown piece of history — it provides a unique window into the political upheavals of early America. In the immediate aftermath of the July 4, 1776, signing, Allen noted, there was a period of “breaking news” in which the Declaration was reproduced and printed in a variety of formats as the news spread through the colonies and eventually made its way across the Atlantic to England.

“The versions that people would have seen in July and August 1776 were broadsides and newspapers, starting with John Dunlap’s broadside, which was printed on the night of July 4,” Sneff said. “Those copies would have made their way across to England as well — there are Dunlap broadsides in their National Archives.”

But it wasn’t until approximately a decade later that the Sussex Declaration was produced, amid a tumultuous period for the new nation.

“Victory was not sweet,” Allen said. “There was financial disaster, the Articles of Confederation were not working … so the 1780s were a period of great instability, despite victory. And this parchment belongs to that decade.”

Among the chief political debates of the era, Allen said, was whether the new nation had been founded on the basis of the people’s authority or the authority of the states. By reordering the names of the signers, perhaps the most conspicuous feature of the parchment, the Sussex Declaration comes down squarely on one side of the argument.

On most documents of the era, Allen said, the protocol was for members of each state delegation to sign together, with signatures typically running either down the page or from left to right, with the names of the states labeling each group. An exception was made for a small number of particularly important documents — including the Declaration, which was signed from right to left, and which omitted the names of the states, though the names were still grouped by state.

“But the Sussex Declaration scrambles the names so they are no longer grouped by state,” Allen said. “It is the only version of the Declaration that does that, with the exception of an engraving from 1836 that derives from it. This is really a symbolic way of saying we are all one people, or ‘one community,’ to quote James Wilson.”

Allen and Sneff will continue to probe how the parchment reached England. Also, they are working on a project in collaboration with the West Sussex Record Office, the British Library, and the Library of Congress to perform hyper-spectral imaging on the parchment and other non-invasive studies in the hope of reading some text that appears to have been scraped away at the top of the document.