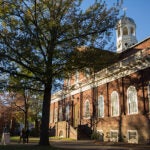 Classical scholar was known for his edition of Manichaeism tract

By Kathleen M. Coleman Department of the Classics

Albert Henrichs, a longtime Classics professor at Harvard, died on April 16. He was 74.

The 10th Eliot Professor of Greek Literature, and the first to have been neither born in the United States nor educated at Harvard, he had been appointed with tenure at Harvard in 1973 when he was only 30 years old.

Henrichs was born in Cologne, and rescued from the carpet-bombing there to spend his early years in Bad Ems. American GIs barracked in a nearby villa made him their mascot, spoiling the toddler with oranges and peanuts; Henrichs later attributed his affinity for the United States to those early memories. He earned his Ph.D. at Cologne in 1966, then spent two years working on the papyri collection at the University of Michigan before returning to Cologne for his Habilitation, the highest level of scholarly accreditation in Germany, and then moving to Berkeley, Calif., in 1971.

Henrichs’ most stunning coup was his discovery of a minuscule 192-page book, written in Greek in the fifth century A.D. Henrichs had carried the text — four lumps of ancient leather ― in a cigar box from Cologne to Vienna, where an expert conservator gradually unpeeled what turned out to be a sensation for the history of religion: a detailed tract about Manichaeism, a rival of Christianity, founded in Mesopotamia in the third century by a young mystic called Mani, whose autobiographical account of his divine revelations is quoted in the text.

Henrichs was just 26. His subsequent publication of the codex with the papyrologist Ludwig Koenen established his reputation as a Wunderkind of classical scholarship.

Henrichs’ second coup was the translation and publication of 46 fragments from a second-century papyrus codex containing excerpts from a lurid Greek novel, Phoinikika (“Phoenician Saga”), by an otherwise unknown writer named Lollianos. The fragments followed the protagonist from the loss of his virginity to his participation in human sacrifice and cannibalism with a band of robbers in Egypt, with whom he consumes the heart of a murdered boy to seal his oath of allegiance to the gang.

In the second half of the 20th century, study of classical Greek religion had focused on ritual. Henrichs brought it back to a focus on the gods, and what made them so: immortality, anthropomorphism, and power. He was world-renowned for his work on Dionysus, his favorite god, especially his role in Greek tragedy and his on-going reception to the present day.

As a professor, Henrichs approached each text with the excitement of a student discovering it for the first time. A member of the American Academy of Arts and Sciences and the American Philosophical Society, he taught until shortly before his death, stopping only when he could no longer reach Boylston Hall.

Henrichs is survived by his wife, Sarah Nolan; his children by his first marriage, Markus and Helen; their mother, Ursula; and two grandchildren.

Kathleen M. Coleman is the James Loeb Professor of the Classics and director of Undergraduate Studies, Department of the Classics, Harvard University.