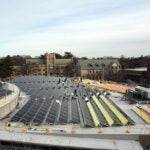 These days, it’s territory mostly dominated by the likes of Raffi and The Wiggles, but lullabies, play songs, and other music for babies and toddlers may have some deep evolutionary roots, according to a paper co-authored by Graduate School of Education doctoral student Samuel Mehr and Assistant Professor of Psychology Max Krasnow.

The theory proposes that infant-directed song evolved as a way for parents to signal to children that their needs were being met, while still leaving time for other tasks, such as foraging for food or caring for other offspring. Infant-directed song might have later evolved into the more complex forms of music we hear today. The theory is described in an open-access paper in the journal Evolution and Human Behavior.

Music is a tricky topic for evolutionary science: It turns up in many cultures around the world in many different contexts, but no one knows why humans are the only musical species. Noting that it has no known connection to reproductive success, Professor of Psychology Steven Pinker described music as “auditory cheesecake” in his 1997 book “How the Mind Works.”

“There has been a lot of attention paid to the question of where music came from, but none of the theories have been very successful in predicting the features of music or musical behavior,” said Krasnow. “What we are trying to do with this paper is develop a theory of music that is grounded in evolutionary biology, human life history, and the basic features of mammalian ecology.”

At the core of new theory, Krasnow said, is the notion that parents and infants are engaged in an “arms race” over an invaluable resource — attention.

“Particularly in an ancestral world, where there are predators and other people that pose a risk, and infants don’t know which foods are poisonous and what activities are hazardous, an infant can be kept safe by an attentive parent,” he said. “But attention is a limited resource.”

While there is some cooperation in the battle for that resource — parents want to satisfy infants’ appetite for attention because their cries might attract predators, while children need to ensure parents have time to gather food — that mutual interest goes only so far.

And attention isn’t the only driver of discord.

The theory of parent-offspring conflict was first put forth more than 40 years ago by the evolutionary biologist Robert Trivers, then an assistant professor at Harvard. Trivers noted that infants and parents aren’t on the same page when it comes to the distribution of resources.

“His theory covers everything that can be classified as parental investment,” Krasnow said. “It’s anything that a parent could give to an offspring to help them, or that they may want to hold back for themselves and other offspring.”

Sexual reproduction means that every person gets half of their genes from each parent, but which genes in particular can differ even between siblings.

Krasnow explains, “A gene in baby has only a 50 percent chance of being found in siblings by virtue of sharing two parents. That means that from the baby’s genetic perspective, she’ll want a more self-favoring division of resources, for example, than her mom or her sister wants, from their genetic perspectives.”

Mehr and Krasnow took the idea of parent-offspring conflict and applied it to attention, predicting that children should want a greater share of parental attention than their parents want to give them. To solve this, Krasnow said, parents were forced to develop some method of signaling to their offspring that their desire for attention was being met.

What makes a signal honest, Mehr and Krasnow think, is the cost associated with it.

“Infant-directed song has a lot of these costs built in,” Krasnow said. “I can’t be singing to you and be talking to someone else. It’s unlikely I’m running away, because I need to control my voice to sing. You can tell the orientation of my head even without looking at me; you can tell how far away I am even without looking.”

Mehr notes that infant-directed song provides lots of opportunities for parents to signal their attention to infants.

“Parents adjust their singing in real time, by altering the melody, rhythm, tempo, timbre of their singing, adding hand motions, bouncing, touching, and facial expressions, and so on,” he said. “All of these features can be finely tuned to the baby’s affective state — or not. The match or mismatch between baby behavior and parent singing could be informative for whether or not the parent is paying attention to the infant.”

Indeed, it would be pretty odd to sing a happy, bubbly song to a wailing infant.

“If a mutation develops in parents that allows them to do that quicker and better, then they have more residual budget to spend on something else, and that would spread,” he said. “Infants would then be able to get even choosier, forcing parents to get better, and so on. This is the same kind of process that starts with drab birds and results in extravagant peacocks and choosy peahens.”

And as signals go, Krasnow said, those melodies can prove to be enormously powerful.

“The idea we lay out with this paper is that infant-directed song and things that share its characteristics should be very good at calming a fussy infant — and there is some evidence of that,” he said. “We’re not talking about going from this type of selection to ‘Rock-a-Bye Baby’; this theory says nothing about the words to songs or the specific melodies, it’s saying that the acoustic properties of infant-directed song should make it better at calming an infant than other music.”

Which isn’t to say the researchers see no possible links to the wider world of music.

“Let’s assume for a moment that the theory is right. How, then, did we get from lullabies to Duke Ellington?” Mehr said. “The evolution of music must be a complex, multistep process, with different features developing for different reasons. Our theory raises the possibility that infant-directed song is the starting point for all that, with other musical behaviors either developing directly via natural selection, as byproducts of infant-directed song, or as byproducts of other adaptations.”

For Pinker, the paper differs in at least one crucial way from other theories of how music evolves.

“In the past, people have been so eager to come up with an adaptive explanation for music that they have advanced glib and circular theories, such as that music evolved to bond the group,” he said. “This is the first explanation that at least makes evolutionary sense — it shows how the features of music could cause an advantage in fitness. That by itself doesn’t prove that it’s true, but at least it makes sense!”