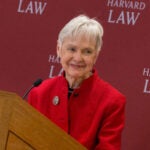 At a Meeting of the Faculty of Arts and Sciences on March 7, 2017, the following Minute was placed upon the records.

Ruth Hubbard Wald was a superb biochemist who studied the light-sensitive molecules (visual pigments) in photoreceptors and a prominent feminist and social activist. Born in Vienna, Austria, in 1924, she and her parents, physicians and leftist intellectuals, fled Austria when the Nazis arrived in 1938, came to the United States, and settled in Brookline. Ruth lived much of her life in Cambridge and died Sept. 1, 2016, at the age of 92.

Ruth attended Radcliffe College as a pre-med student and soon met her first husband, Frank Hubbard, who became a leading harpsichord maker and whom she married at age 18 in 1942; they separated in 1951. After her graduation from Radcliffe in 1944, she spent a year working as a Research Assistant with George Wald, a Professor of Biology at Harvard, who was to become her second husband in 1958; they had two children Elijah (b. 1959) and Deborah (b. 1961).

In 1946, Ruth entered graduate school, joined Wald’s laboratory, and began her studies on visual pigments. Wald had previously shown that visual pigments consist of vitamin A aldehyde (now called retinal) bound to a protein called opsin. Ruth’s initial project in the laboratory, for which she was awarded her Ph.D. in 1950, was to elucidate the mechanism by which vitamin A was converted to retinal. From there, she investigated how a visual pigment molecule is synthesized from retinal and opsin, and with Wald and other members of the group, they made the ground-breaking discovery that a specific shape (isomer) of retinal is required to synthesize all visual pigments. A few years later, with Allen Kropf, a postdoctoral fellow, she showed that the only effect of light on the visual pigments was to change the shape of retinal. This leads to structural alterations in opsin that result in excitation of the photoreceptors. For this brilliant set of studies, Ruth and George Wald were jointly awarded the distinguished Paul Karrer Medal in 1967. In 1973, Ruth was elected a Fellow of the American Academy of Arts and Sciences and a Trustee of the Marine Biological Laboratory in Woods Hole, where she and George spent summers.

As a continuing member of the Wald Laboratory, Ruth held several positions, including Research Fellow, 1954–58, Research Associate, 1958–68, and Lecturer, 1968–74. In 1974, she was appointed Professor of Biology at Harvard, the first woman to be tenured in the department. Over the years that Ruth was in the Wald Laboratory, she mentored and worked with many students, postdoctoral fellows, visitors, and junior colleagues, including one of us (JD). She was generous with her time—sharing ideas and providing encouragement and positive criticism. She had exceptionally high standards regarding experiments and how they were written for publication. She organized lunches for the laboratory and conversations around the table were intense—whether scientific or political.

By the time Ruth received tenure, her interests had moved away from scientific experimentation to feminist issues and social activism. She established a pathbreaking course, “Biology and Women’s Issues” (Bio.109), that taught critical thinking in historical context about biology, about science, about gender and sexism, about sexuality, and about racism in relation to women’s health, rights, and participation in society. Bio 109 began as a small seminar held at Radcliffe College in 1975, one year after Ruth was tenured, but by 1979 it had grown into a large course with over eighty students. Two of us (NK and EH), served as TAs in Bio 109 and were mentored by Ruth as were many other women students in biology, medicine, public health, and the history of science.

Building on Bio 109, Ruth co-edited a book in 1979 titled “Women Look at Biology Looking at Women,” which included her pathbreaking essay “Have only men evolved?”. A collection of feminist critiques, its central insight was that “women’s biology not only is not destiny, but it is often not even biology … as a result, it contains a number of convenient myths that bolster sexist social practices.” Reissued in 1982 as “Biological Women: the Convenient Myth,” it included a history of science that had been used to discriminate against women and became one of the founding texts in the field of the history of women in science. The book spurred additional critical scholarship by providing a 55-page bibliography on the fast-growing field of women, science, and health.

Ruth’s activities and writings in the 1970s and early 1980s ushered in an era of feminist critiques that exposed the role of science in supporting discrimination against women. She decried the use of evolutionary theory and genetics to support deterministic explanations for human social behavior. In 1975, she joined a gathering of academics preparing a critique of sociobiology which included one of us (JB). The group criticized the claims of sociobiologists for the evolutionary basis of many human traits and social arrangements. However, Ruth was dismayed that the group had ignored the sociobiological justification of women’s social status, including the dearth of women in “political life, business, and science.”

Ruth’s concerns about biological determinism expanded beyond women’s issues to those of genetics, eugenics, and race. A cofounder of the Council for Responsible Genetics, she questioned the use of new reproductive technologies, including the expansion of genetic testing and the possible arrival of genetic enhancements and their indications of a wave of eugenic thinking. Her last book, “Exploding the Gene Myth” (1993), co-authored with her son Elijah, was a bracing critical examination of the ways in which genetic information is often misinterpreted by scientists and business. Ultimately, her concerns led to the basic question of who gets to do science, how the racial and gender makeup of the science community influences what subjects are explored, and who benefits from scientific achievements. Ruth will be remembered for her scientific achievements, her influential teaching and mentoring of women students, and her commitment to social justice throughout her distinguished Harvard career.