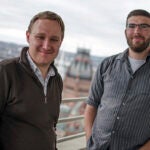 This government agency is all about endlessly improving military technology

It’s a government agency unlike any other, with sophisticated change as its mantra.

When Steven H. Walker, acting director of the Defense Advanced Research Projects Agency (DARPA), spoke at Harvard Wednesday evening, he first reminded his listeners just how much his agency, which develops technology for the military, has accomplished.

“When we consider a project, we ask first if it’s something that can change the world,” he told interviewer Michael Sulmeyer, director of the Cyber Security Project at the Belfer Center for Science and International Affairs. “In the 1960s, we decided we should think about connecting computers and having some way for them to talk to each other.” Then known as ARPA, the agency developed and in 1969 launched the ARPANET, the precursor to the modern internet.

“In a succinct way, that’s what we’re looking for every day: breakthrough technologies that will give an advantage to our war fighters,” Walker said. “And I tell people who come in that if you don’t invent the internet, you get a B.”

DARPA remains at the leading edge of national security-related technology, as evinced by the title of the John F. Kennedy Jr. Forum session at the Harvard Kennedy School: “The Internet, Invisible Aircraft & Robots: The Future of Defense Is Now.”

Recently DARPA made news for developing a computerized exoskeleton that could turn a combatant into a “super soldier,” and the projects now in development are no less ambitious. It also has had a leading role in robotics and stealth airplane research.

“The people who come to us have usually done something profound in their careers already, and have an idea that they can’t develop anywhere else,” Walker said. “For example, one of our former directors worked with the Air Force to develop the first stealth airplane. Part of what we do is to invest in technology, but we never forget who we’re working for. The war fighter is our customer, and what we do is about protecting the nation.”

Still, he emphasized that DARPA’s more ambitious projects have wider-ranging effects. For example, the fact that many soldiers in the Iraq War lost arms led to important research on prosthetics. “At that time, the state of the art was still the hook. But we developed two arms, the first of which is already FDA-approved. It’s one that you can use your foot to control, an arm that can bend and stretch.” And neurological research is underway to create a robotic arm that can be felt by the user. “This can be tied into the motor cortex of the brain, so that the person can move the arm by thinking about doing it. We can also give that person a sense of touch, tying that back into the sensory cortex.”

Walker said that artificial intelligence also holds promise, whether to develop combat technology or to mechanically absorb more information than a human brain could hold. Still, he said that robotic cyber-warriors are best left to the fantasy world. “We’re very clear that the lethality decision should always be made by a human. But we can develop technology for the human war fighter to make his decisions more quickly and effectively.”

If the brain is the next development frontier, Walker said that this poses risks as well as promises.

“As we understand more and more about the brain, there are all sorts of positive aspects you can think about, in terms of curing disease and psychological disorders. But once you open that door, you can also imagine things that you wouldn’t want to happen, things that can make us less human.” Responding to an audience question, he admitted he worries about such advances getting into the wrong hands. “It goes back to biology, the manipulation of DNA to do potential good like fighting illness. What keeps me awake at night is the thought of some man-made pathogen that we don’t have resistance to.”

The Donald Trump administration was invoked only once, when a student asked whether the change of government would affect DARPA’s work. “The transition’s gone great,” Walker said. “We’re an apolitical group, and we’ve always had bipartisan support. We keep our heads down doing what we always do: trying to think of good ideas to prevent technological surprise and to protect our troops. So we’re charging forward, and we’re not stopping.”