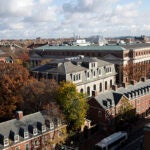 Mary Maples Dunn, a historian and advocate for women’s education who presided over Radcliffe during its merger with Harvard, died on March 19. She was 85.

“Mary always believed firmly in what women could do,” Harvard President Drew Faust said. “She made that clear both in what she said and in the model she represented.”

An educator for more than four decades, Dunn arrived at Harvard in 1995, after serving a decade as president of Smith College. She had intended to retire from Smith, but her devotion to libraries and to building access for women led her to accept a position as head of the Schlesinger Library on the History of Women in America.

That again was a likely last stop, but when Radcliffe tapped her to serve as interim president, Dunn rose to the occasion, steering the women’s college through its merger with Harvard and its transformation into an institute for advanced study that built on Radcliffe’s twin missions of academic excellence and commitment to women.

“She was so widely liked and respected that she was kind of an emollient in the midst of the controversy surrounding the transition,” Faust said. “She was also hugely competent and a real leader who brought the institution forward.”

Dunn was at the table as Radcliffe and Harvard ironed out a merger deal, taking on one of the most contentious issues of the negotiation: what to do with faculty appointments.

“When news of the ‘merger’ between Radcliffe and Harvard was announced, I was excited and relieved to learn that Mary would be serving as acting dean,” Radcliffe Institute Dean Lizabeth Cohen said. “Mary was extremely well suited to take on this delicate role … She was smart as a whip and had intellectual and administrative gravitas as the former president of Smith College. But she also wore those qualities lightly and mixed them with a delicious sense of humor that disarmed potentially angry alums and endeared her to many of us.”

Speaking to incoming freshmen in 1999, Dunn noted that the merger with Harvard was but one increment in Radcliffe’s history.

“Metamorphosis is a useful metaphor for the transformation of Radcliffe,” she said. “A step that seems sudden … is actually part of an ongoing process.”

The second of four children, Dunn was born in Sturgeon Bay, Wisc., in 1931. She studied history in the early 1950s at the College of William and Mary, her sense of justice developing as the Civil Rights Movement spread across the South. Later, as a graduate student at Bryn Mawr, she was awakened to the possibilities of gender equality.

“At first it seemed like an unreal kind of world … [but] I began to see how important it was,” Dunn told The Harvard Crimson in 1999. “I was in a place that was pretty much run by women and for women.”

She earned her master’s and doctorate in history from Bryn Mawr, and then stayed on to teach, specializing in colonial America and the history of women, contributing to the transformation of women’s history into a field of scholarly importance.

Dunn was president of the Berkshire Conference on the History of Women in 1974 when the group organized a session at Harvard that drew more than 2,000 historians and garnered a New York Times story headlined “The Woman in History Becomes Explosive Issue in the Present.”

“She will be remembered for her stalwart, unfailing commitment to the educational needs of women, not just affluent daughters, but daughters of the not affluent,” said Patricia Albjerg Graham, who was dean of the Radcliffe Institute in the 1970s, and then became Harvard’s first female dean, overseeing the Graduate School of Education from 1982 to 1991. “That characterized her work at Bryn Mawr, at Smith, and ultimately at Radcliffe.”

Among Dunn’s students at Bryn Mawr was a young Faust, whom Dunn once described as an outstanding pupil, “the type of student you shape your teaching to.” The admiration was mutual; Faust says Dunn was “one of my absolute favorite teachers.”

“She was just a great teacher,” Faust said. “She was jolly, energetic, smart, interesting, open. She was just great.”

It was the beginning of what would turn into a decades-long friendship. Dunn and her husband, Richard, socialized often with Faust and her husband, Charles Rosenberg. Dunn was thrilled when Faust had a daughter, knitting her a baby blanket and telling Faust, “You’ll make her sane and Charles will make her interesting.”

Faust believes it was Dunn who recommended her to then-Harvard President Neil L. Rudenstine to lead the new Radcliffe Institute, and it was Dunn who urged Faust to come to Harvard. When Faust asked to delay assuming her responsibilities at Radcliffe for several months so that she could fulfill writing and teaching commitments, Dunn stayed on in an interim capacity without hesitation.

“She just wanted to set it up in the best possible way to make me succeed,” Faust said. “I had my leadership tutorials watching her.”

Dunn was an authority on William Penn, collaborating with her husband, a fellow historian, on scholarly projects, including editing the four-volume “Papers of William Penn.” After she departed Radcliffe, she and Richard served as co-executive officers of the American Philosophical Society in Philadelphia until 2007.

Dunn was appointed dean of Bryn Mawr’s undergraduate college in 1978. In 1985 she was named Smith College’s eighth president, presiding over the school during a time of budgetary and racial turmoil.

Upon her retirement in 1995, she said she hoped to be remembered more for the latter era; her administration created programs to promote inclusion and diversity, increasing the hiring of underrepresented minority faculty and the enrollment of minority students.

“I would like to think that I had something to do with preparing the organization and the institution to live in a more diverse world than the one we used to inhabit,” she told the Smith Alumnae Quarterly.

An enthusiastic cook, Dunn was entertaining friends at her home right up until the end of her life.

“She loved being a hostess,” Rosenberg said. “And in some ways that skill served her well as an executive.”

Expressing her gratitude for the honor, Dunn said, “I’m more grateful for the opportunity to build the bridges between Radcliffe and Harvard.”

A memorial service will be held at Radcliffe Institute, Knafel Center, 10 Garden St., April 8 at 4 p.m.