The machinery of hearing 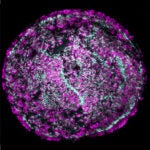 At their simplest, the sounds that surround us — from a baby’s cry to heavy metal — are merely vibrations in the air. It’s the job of the ears to capture those vibrations and convert them into neural signals that can be processed by the brain, enabling us to make sense of our aural environment.

How does the conversion from mechanical vibration to electrical signal occur? Harvard scientists are closing in on answers.

The latest step is a study by Professor of Molecular and Cellular Biology Rachelle Gaudet, Ohio State University Assistant Professor Marcos Sotomayor, and first author Robert Powers ’14. The research, described in a March 7 paper in Structure, not only sheds new light on how hearing works, but could help scientists clarify how it might deteriorate or be damaged over time.

“This is an important part of the machinery that enables us to hear … so what we’re trying to do is assemble a parts list of the machinery that does this conversion,” Gaudet said. “The proteins we have been studying are two members of a family of proteins, about 110 of which are found in our genome. These proteins are involved in processes like cell adhesion and intercellular signaling, so by studying these two, we also hope to get a view into what features you might find in the others.”

At the heart of the system, Gaudet said, are bundles of tiny hairs deep in the cochlea that are connected via protein chains, called “tip links.”

As the cochlea vibrates in response to sound, she explained, the hairs move, causing tip links to stretch and open ion channels on the hairs. As positively charged ions flow in, they generate the electrical signals the brain uses to process sounds.

“We’re zooming in to understand what that tip link actually looks like at the atomic level,” Gaudet said. “One of the questions we want to answer is whether that tip link connection is springy or stiff. Is it like a rod, or is it like a rope, or like a rubber band?

The links are made up of two proteins, cadherin-23 and protocadherin-15. Gaudet and colleagues had previously focused on the area where the two proteins meet; their new work moves on to other regions.

“We’re basically doing this in pieces so we can get a view of how the whole structure might work,” Gaudet said. “Eventually, our goal is to be able to reconstruct the whole tip link, but we were particularly interested in looking at this region because there are some unusual features here.”

Among those, she said, are signs that some areas of the protein are more flexible than others.

Calcium in the endolymph — the fluid in the inner ear — binds to the proteins, helping increase the strength and rigidity of the tip link, Gaudet said. In several areas, however, that process never takes place.

“In the long protocadherin-15 sequence, we expect to find amino acids capable of binding calcium at regular intervals, but in this area of the protein many of them just weren’t there,” she said. “We wanted to see what that looked like … and it appears this has an effect on the flexibility. Our molecular dynamic simulations showed that in areas where there is a lack of calcium, there is an increase in flexibility.”

The potential explanations for why those regions bind less calcium aren’t limited to an increase in flexibility.

“We believe there are other, similar joints at other locations along the tip link, so instead of being like a rigid rod, it may be more like a rope,” Gaudet said. “This could provide some more robustness and enable it to withstand the strong forces it is exposed to. But it might also be something that makes the assembly of the tip link easier, so it more readily finds its way to the tips of the hairs.”

Gaudet and colleagues also targeted the area with the hope of understanding how and whether a tiny mutation, found to be prevalent among East Asian populations, produces any discernible structural differences in the tip links.

“Unfortunately, we couldn’t find any difference,” she said. “We ran it through a battery of tests, we did simulations to examine its flexibility, we looked at how well it binds the calcium, and it doesn’t seem to affect any of the measurements we made.”

Ultimately, Gaudet said, understanding how hearing works can shed new light on how the system behind it might break down, and how it might be repaired.

“There are over 50, and maybe as many as 60 different deafness-causing mutations that have been identified in these tip links,” Gaudet said. “Some are very subtle — they might be a change in just a single amino acid that weakens the tip links and causes deafness. If we understand how these structures work, we can better understand how they might fail, and how we might stop or correct it.”