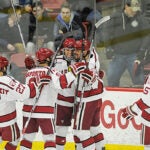 As President Trump last week issued a new executive order preventing citizens from six Muslim-majority countries from entering the United States for 90 days, Harvard continued to ramp up efforts to support international students and scholars in understanding and coping with the policy shift.

In remarks to the Faculty of Arts and Sciences, President Drew Faust said last week that she remains “deeply troubled” about the order’s implications for Harvard and for higher education.

Echoing some of the sentiments she outlined in a Jan. 29 letter to the community, Faust expressed concern about repercussions from the travel order on the University’s mission.

“We face a very real risk that students and scholars from all corners of the globe may no longer see Harvard and other U.S. universities as attractive places to pursue their studies,” she said. “This would have grave consequences not only for higher education but for the country as a whole. … The thousands of individuals who come to our campus from around the globe each year are essential to who we are and what we do, and we must continue to advocate for the significance of travel and shared ideas around the globe.”

Advocating for the Harvard community

Faust has spoken with congressional leaders and others in Washington, D.C., and in Massachusetts about the new immigration policies and their effects on the academic community. She also has co-signed several letters to Trump regarding the order, one joining 47 other college and university presidents and another with Harvard joining 181 other institutions in a letter organized by the American Association for the Advancement of Science.

In addition, the University has filed amicus briefs along with other colleges and universities — one brief in Massachusetts litigation involving an earlier version of the order and another in related litigation in New York — saying the order undermines the values and contributions of open academic exchange and collaboration. The Harvard Immigration and Refugee Clinic (HIRC) at Harvard Law School has also filed several amicus briefs related to the order.

The ban is a revised version of a Jan. 27 order that temporarily barred citizens from Iran, Iraq, Libya, Sudan, Syria, Somalia, and Yemen from entering the United States. That order was blocked by federal judges. The new travel ban, set to go into effect on March 16, removed Iraq from the list and exempts green card holders, dual nationals, people currently in the United States or holding visas valid as of Jan. 27 or March 16, and those already granted asylum or refugee status.

“Our commitment to global engagement, to bringing talented faculty, students and scholars here from all around the world is fundamental to our mission,” said Washburn. “It’s essential to everything we do. Our commitment remains steadfast to do everything within our power to allow all the members of our community to pursue their academic and professional interests freely and to the best of their ability.”

Of the nearly 10,000 international students and scholars who have come to Harvard this year, 135 were born in or are citizens of the countries listed in the second executive order, said Martha Gladue, HIO director. A couple of Iranian researchers were barred from entering the country in the wake of the first travel ban, but were allowed to enter the country after the federal courts blocked it. As of now, “Everybody who is supposed to be here is here,” Gladue said. “We had no one ultimately denied entry due to the executive order.”

The order has generated uncertainty and angst among international students, including some from countries not listed in the ban, said Maureen Martin, HIO director of immigration services. Students worry that the government could extend the 90-day order or add countries to the list.

“The fear and anxiety among the general international population has grown dramatically since this happened,” said Martin. “People across the board have anxiety about traveling and what their experience will be in reentering the United States. They worry that everything could change overnight.”

Registry for those traveling overseas

Harvard officials recommend that students and scholars from other nations who are planning to travel overseas first speak with an immigration expert at the International Office to make sure they have the proper visa requirements to re-enter the country. The officials also urge students and scholars to register with the Harvard Travel Registry through Global Support Services, and in case of trouble on re-entering to call 617-998-0000 or email travelassist@harvard.edu.

The International Office has 12 full-time advisers who work with the Harvard community. The office has added another adviser to help meet the demands of the travel bans, said Gladue. HIO also provides international students and scholars with regular updates and guidance, and offers a range of information on its website, including a list of frequently asked questions developed by HIRC.

The University also has identified six law firms and legal aid organizations that are prepared to offer assistance to members of the Harvard community if they are denied reentry or are otherwise held up at the border. This resource can be accessed through the International Office and Global Support Services.

In addition, Harvard officials have held 18 information sessions around campus, with more than 1,000 people attending.

The Graduate School of Arts and Sciences (GSAS) notes that it will work with any students affected by the order to adjust their G-clocks, the number of years that students typically have to earn doctorates. “GSAS stands ready to work with academic departments to provide G-year adjustments to any students who suffer disruptions to their academic progress due to circumstances beyond their control,” said Garth McCavana, GSAS dean for student affairs.

Harvard also is continuing to work on a related issue, its concern over its undocumented students. In a letter Faust wrote in November, she highlighted Harvard’s “clear and unequivocal support” for such students, who are “part of the fabric of University life.”

Harvard supports the continuation of Deferred Action for Childhood Arrivals (DACA) status as well as legislation such as the BRIDGE Act, which would recognize DACA statutorily, and the DREAM Act, which would provide permanent legal status.

Resources include a website that provides a centralized source of information for undocumented members of the Harvard community, weekly support groups where students can talk with a counselor, and legal assistance through the Immigration and Refugee Clinic, which recently hired attorney Jason Corral to represent undocumented students and those with legal status obtained through the DACA initiative.

“We’ve been advising people since the first set of executive orders came out in January pretty consistently until now,” said Sabrineh Ardalan, the clinic’s assistant director.

In addition, Harvard has co-signed a letter, coordinated by the American Council of Education, that calls on the Trump administration to work with the higher education community to support these students and allow them to stay, study, and work.