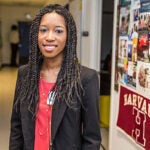 After blanking Providence College, 3-0, in the East Regional opening game in Rhode Island last Friday, the Crimson defeated Air Force 3-2 in the final Saturday night. The team, which is amid its longest win streak ever, now squares off against Minnesota-Duluth in the NCAA Frozen Four Championship in Chicago on April 6.

Following the last game, goaltender Merrick Madsen ’18 was recognized as the East Regional’s most outstanding player. Madsen is the first Harvard player to earn that honor at an NCAA regional. Joining him on the all-tournament team were Tyler Moy ’17, Ryan Donato ’19, and Adam Fox ’20.

You can find more details here.